A Clash of Kings: A Song of Ice and Fire Book 2 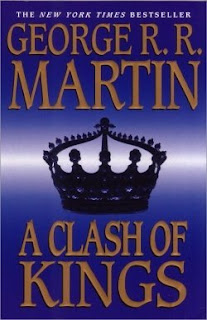 And so I finish the second long-winded chapter installment in the series A Song of Ice and Fire.


A Clash of Kings picks up where A Game of Thrones left off. If you haven't read the first book, I'd be hard put to mention any details lest I spoil anything for you. On the other hand, if you did read the first book, or took the shortcut watched the HBO series, then you know what I'm talking about.
This second book in the series follows the three storylines in A Game of Thrones. First, there's the war between and among the various Houses from all four corners of Westeros, prominent among which are the Houses Baratheon, of the crowned stag sigil; Lannister, of the lion sigil, and Stark, with the direwolf sigil. Then, there's the story set on The Wall and the cold, wild lands beyond it, featuring Jon Snow, Lord Eddard Stark's bastard, and his black brothers of the Night's Watch. Finally, there is the story of Daenerys Targaryen, aka Daenerys Stormborn, of House Targaryen of old, who remains exiled across the waters from Westeros.

The beauty of the shifting points of view is that the story is mostly told by the non-major characters, such that everything unfolds from the perspective of a "lesser" character. From the title of this book, it can be easily gleaned that the plot would be principally about warring kings. The points of view of the non-king characters, however, makes for a from-the-outside-looking-in perspective, which I really appreciate. It feels as though I am reading or watching the goings-on from a distance, and when the point of view does come from a "king" character, I feel like I am merely given a glimpse into that specific character's personal thoughts.
Many who read the first book may have been appalled, turned off or disheartened by the events in the latter part thereof. If you were one of them, I'd dissuade you from continuing with this book; this one is definitely not for the fainthearted. The violence and gore were upped a notch, and the number of casualties has increased as well. George R.R. Martin definitely has no qualms about offing characters, major or no, but the discerning reader must know better; there's always a good reason for such tragic deaths. One-track minds may well be better off reading other fluffy stuff.

I loved Tyrion Lannister in the first book; in this one, I worshiped him. Whatever he lacked in height, he more than made up for with his cunning and wit. Oh, who am I kidding? Everyone was scheming, everyone had their own selfish agenda to consider before a hand is lifted or a word is uttered. Notwithstanding, he is my favorite character from the first two books, hands down.

As it was with A Game of Thrones, the conclusion of A Clash of Kings was likewise left hanging. The saga continues in A Storm of Swords. See ya in a bit. ;)
Rating: 5 of 5 stars
Email Post
Labels: 2011 Fantasy Five Stars Kindle Reviews Series