Faves of TwentyEleven: The Characters

Okay, characters. This year, I've met a lot of interesting and memorable characters in the books that I've read, so let me see if I can put them into categories. :) 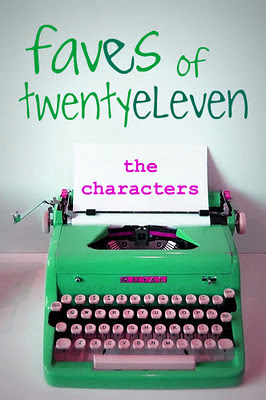 Day Two: The Characters
favourite female main character
I admired Little Bee from Little Bee (yep, that's her name!) by Chris Cleave because of - and I quote from my review of the book - "her resolve to continue living, to rebuild her almost-destroyed life because of the turmoils and upheavals in her native country".  Despite the many trials and tribulations that came her way, she chose life, and thought wisely how to live it.


I also loved Aibeleen and Minny, the two black maids from The Help by Kathryn Stockett because, despite their personal struggles and the bigotry that was prevalent in 1960s United States, particularly in Mississippi, they endured everything and were able to rise above it all.

favourite male main character
Hands down, it would have to be Tyrion Lannister from the A Song of Ice and Fire series. A "giant dwarf" is what I call him: physically and horizontally challenged, but huge in wit and sarcasm. Oh, the sarcasm. It's so sarcastic I find it just funny. Hopefully, he will be kept alive until the fifth book (and if you know of his fate in A Dance With Dragons, I would appreciate your discretion, thank you). I would just be devastated if George R.R. Martin offs him soon. :(

best couple <3
For best couple, it would have to be the unnamed couple featured in The Lover's Dictionary by David Levithan. I know that it was the manner in which their story was told that was truly remarkable, but I fell in love with them nonetheless because, well, I could relate. There was nothing extraordinary or exceptional in their love story, but it was that ordinariness - that normalcy - that ended up having the most appeal.

who i so want to be friends with
I would love to be friends with Stargirl, because I want some of her positivity and enthusiasm rub off on me - even during the days when she only had a measly number of pebbles on her happy wagon, she didn't seem to lack in energy and love to share.

who i fell completely in love with (new literary crush)
I can't think of anyone I really "fell in love with", but I could think of a couple of characters whom I truly admired: Rhett Butler of Gone With The Wind by Margaret Mitchell, for his smart-alecky ways, boundless sarcasm for Scarlett O'Hara and gentlemanly manners towards Melanie, and Teo Sandoval of Love Walked In by Marisa de los Santos. I am due to read its sequel, Belong To Me, soon, and I am prepared to fall in love with Teo on that one. :D

worst (best & baddest) villain
Oh villains! I so hate Joffrey Baratheon in the A Song of Ice and Fire series, but I must admit that he is an effective villain for me to hate him that much. Ugh.

best kick-arse female
Diana Bishop from A Discovery of Witches, the debut novel of Deborah Harkness, tops my list. She is a scholar, an alchemical researcher, and a witch - descended from the most powerful line of witches, making her own powers extraordinary. Because she shunned these powers from her early childhood, she has yet to discover their extent, but when they are unleashed... She's going to kick arse. :D

best kick-arse male
Diana's co-protagonist and love interest in A Discovery of Witches is an age-old French vampire named Matthew Clairmont, and it is to him I bestow this award. He is no Lestat de Lioncourt, of course, and absolutely not within the vicinity of the likes of Edward Sparkly-Boy Cullen, but he is handsome, charming, smart, and most of all, powerful.

broke your heart the most
Cal/Calliope Stephanides, the hermaphrodite in Middlesex, broke my heart. All his life, he had been living a lie, and when he finally came to terms with what he truly is, it was the most difficult and heartbreaking time. And even when he had finally accepted this, fate comes in and plays tricks on him... Happiness always seems to be within reach, but one that he can never attain. :(

favourite pet/animal character award
It would have to be the black cat in Coraline, who was instrumental in saving the lives of Coraline's parents and Coraline, herself. Yes, it's a talking cat. :)

favourite sibling relationship
I loved the relationship between Arya Stark and Jon Snow from the A Song of Ice and Fire series. Despite the known fact that Jon Snow was her father's bastard, Arya considered him her true brother, and Jon, in return, treated her like a little sister.

favourite best friends/friendship award
I can't imagine having a first-grader as a best friend, so my favorite friendship award goes to Stargirl and Dootsie Pringle. The age difference never mattered at all from the get go, and their friendship knows no boundaries.

More to come in the following days. I enjoyed making this one, remembering all my favorite characters and recalling what it was about them that I liked, hated, and admired. So, do come back for my next installment in this series, which I will complete sometime in the very near future. :D
Email Post
Labels: 2011 Memes The Gamut