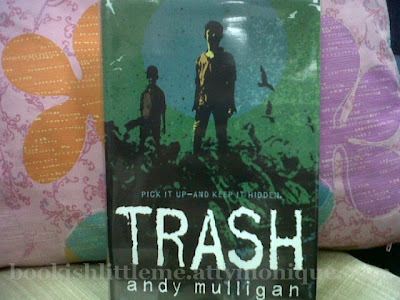 Far from diverting attention from the Philippines, the seemingly insignificant details that Andy Mulligan utilized in Trash even serve to reinforce the idea that the story was actually set in our very own Manila, particularly in that hectares-big dumpsite called Payatas. (Smoky Mountain, the old dumpsite in Tondo, has since been closed and abandoned. In the book, Payatas was renamed Behala.) Aside from familiar places in the metro and the very Filipino names, most telling, in my opinion, is the fact that the dialogue used by the young protagonists is replete with the word po, which denotes respect when speaking to older people. If you could think of any other third-world country that speaks po aside from the Philippines, then I would gladly be enlightened.

But I digress. Trash is the story of Raphael, Gardo, and Jun-jun alias Rat: three dumpsite boys who find – well, maybe not exactly treasure – in trash, but something life-altering, at the very least. Classic and far-from-exceptional plot, yes. Even I could easily construct a storyline similar to this one. But the fact that the concept, atmosphere, and even political and historical milieu of the story are structured with the Philippines in mind brings this novel close to home - literally and figuratively.

Trash was simply written. So simple, in fact, that the style felt amateurish and basic to me. Not that there's anything wrong with basic, don't get me wrong, but it could have been better. Plot-wise, I appreciated the mystery that it presented, although how it will eventually play out in the end was pretty much predictable.

There were specific parts in the novel, however, that elicited feelings of indignation from me. The portrayal of the 3 dumpsite boys, and how they displayed their cunning, deviousness and street-smartness, made me cringe inwardly - could be that I was also in denial that little boys like them could be so deceiving. The police brutality that was so graphically described also made me wrinkle my nose in disgust. But the truth of the matter is that the things and situations in the book are real-life, everyday events that I've merely taken for granted, and having to read it like that is like being splashed by cold water right in the face. Yes, my country's state of affairs and poverty level are dismal and leave much to be desired, and change doesn't look forthcoming in the near future. Having accepted this as a fact, I would prefer not reading about it anymore, thank you very much.