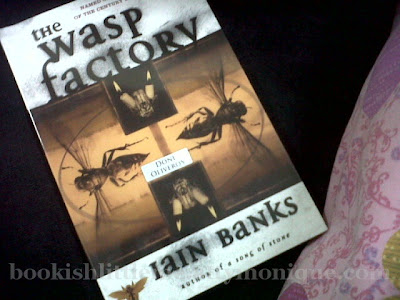 There is no other adjective that comes to mind, no matter what amount of brain-racking I did, that would fit this book perfectly other than grotesque.

Frank Cauldhame is a sixteen-year-old murderer with 3 deaths to his name: his cousin Blyth, younger brother Paul, and little cousin Esmerelda. His only justification for the murders: it was a "phase" he was going through. Frank lives with his father in a remote Scottish island, not officially or legally existing insofar as census was concerned, and spends his time killing off animals and bugs, keeping The Wasp Factory alive on the loft of the house he shares with his father. Frank has an elder brother, Eric, who escapes from a sanatorium and was making his way back to them, setting dogs on fire on the way.

Each of the sentences written above comprises a separate sub-plot in the novel. My initial thoughts about the book was that it should be really interesting to know how a young adolescent boy would have the discernment and guts to kill other kids - and his own kin, too, to boot. Each murder was premeditated and deliberated upon, leaving no room for error, and masterfully dealt with in order to avert suspicion from himself after the killings. I thought that this was the center of the plot, that this was where the storyline would evolve, and so I was sorely disappointed to find out otherwise.

The story about Eric was a different one, the part about the kids that Frank had murdered were another, and then there's that other thing about Frank himself that's supposedly the Big Twist right by the end. Okay, the meandering plots were just too confusing, and the storytelling wasn't engaging enough to sustain interest.

Not to say that the book wasn't suspenseful, though, because it was. Eric's impending homecoming from the sanatorium was creepy, and the calls he made to Frank were fraught with insanity, it was so stressing to read them. There's also the mystery of the constantly-locked door to Frank's father's study, which room Frank, for the life of him, hasn't even glimpsed the inside of. And then finally, there's the odd scene where Frank simply had to pee from sheer drunkenness, but had to escape his dwarf-friend Jamie before he could do it. I mean, why??

All in all, I thought this book was a fair read, but it didn't affect me in a memorable or significant way. Mostly, I got tired of reading about Frank's amateurish wars with bugs and animals, and the eccentric rituals he did with the wasps. The ending was supposed to be shocking, I know, but all I could think after reading it was, Where on earth did that come from??

My copy: Borrowed from Kuya Doni of Goodreads :)