The Boy Book: A Study of Habits and Behaviors, Plus Techniques for Taming Them 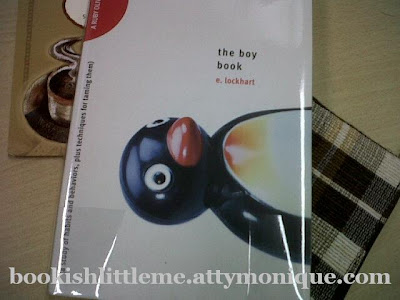 “I made the right decision. But that doesn't mean I don't have any regrets.”

For some reason, this line from the last chapter of The Boy Book left a sad, empty feeling inside. It made me want to wish that Ruby “Roo” Oliver were right in front of me so I could, right at that moment, just give her a biiiig hug. You know. Like girlfriends do. :P

Since The Boyfriend List, I have grown quite fond of Roo and her various teenage debacles, panic attacks, and constant angsting about, well, stuff and people. There are her former friends, especially Kim, her bestest friend; the only love of her sophomore life (or so it seems) and official boyfriend for 6 months, Jackson; Noel and Angelo, her almost-more-than-friends-boyfriends-but-not-quite; her performing artist mother Elaine (of the infamous Elaine Oliver: Twist and Shout!) and backyard/dock horticulturist father Kevin, and; her shrink, poncho-wearing African-American Dr. Z.

The Boy Book follows through where The Boyfriend List left off. After the debacles of sophomore year, this sequel opens another (school) year in Roo's life – her junior year at Tate Prep during which time she explores the possibilities of welcoming new friends (maybe even boyfriends), reconciliations, understanding and loyalty, making the right decisions notwithstanding the possibility of regret later on, and unselfishness. I'm afraid that if I delve too much into the plot of The Boy Book, I may inadvertently drop a spoiler or two, so I will exercise restraint and prudence and stop right here.

(Unlike my thoughts on The Boyfriend List which I enumerated as 5 Reasons Why I Liked It, 3 Reasons I Didn't, and A Recommendation, I decided I really wasn't any good at lists and making them. Heck, I even hate listing stuff down for grocery-shopping, but I have to, so there.)

I liked and appreciated The Boy Book for the same reasons that I did its prequel: it tackled relevant teenage issues, it showed how kids actually deal with these angst-ridden problems, and it demonstrated how, shallow as these so-called problems may seem to the grown-ups, kids view them, from their inexperienced and limited perspectives, as mind-boggling and universe-shifting. I liked how, in the end (and through her helpful sessions with Dr. Z), Roo finally came around and acknowledged that, much as she would like to, there are things that she can never change, there are people with whom relationships are not meant to last, and the only action left to take is to accept them as they are. This may sound silly, I know, but as I was reading about Roo's journey to self-discovery, I had grown to love and sympathize with her. I felt like I wanted to be her friend, and I rooted for her every step of the way.

The Boy Book may no longer be exactly age-appropriate for me, I know, but that doesn't diminish its appeal because of the many lessons it imparted, regardless of age. Just imagining my baby daughter at Roo's age sometime in the distant future and her going through the same teenage issues is enough to make me realize how important a support system is, which Roo had in her parents and Dr. Z.

Thankfully, too, the footnotes were significantly lessened in this book, unlike its predecessor. Small footnotes I can handle, but not chunky ones where it takes up most of the page or continues on to the next. They tend to distract from the narrative. The comedic aspect, as well, is as prevalent in The Boy Book as it was in The Boyfriend List. The entries made by Roo and her old friends in the actual Boy Book were funny, I would chuckle out loud at some. My personal favorites? The clever comebacks to inappropriate catcalls: “I can't be angry at you today. It's Be Kind To Animals Week.”; “Didn't I dissect you in Biology class today?”; and “Have you had your brain checked? I think the warranty has ran out.” I wish I were that witty. ;)

In sum, I loved this book just as much as I did the first one. And it must be said: It's because of books like these that I appreciate YA, and find them worth the time spent reading. ;)