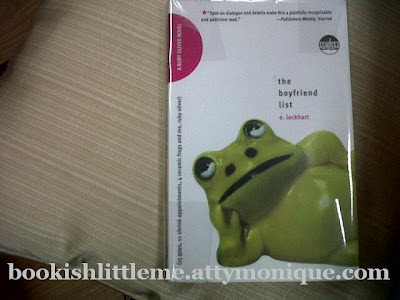 Since The Boyfriend List is a book about lists (15 Guys, 11 Shrink Appointments, 4 Ceramic Frogs, and Me, Ruby Oliver), I think I'm going to go out of the box and write my thoughts on the book in enumeration form, too. My personal sub-title: 5 Reasons I Liked It, 3 Reasons I Didn't, And A Recommendation.

5 Reasons I Liked It:

1. It dealt with high school reality and teen angst/problems, much in the same manner that Stargirl (by Jerry Spinelli) did. Personally, I never experienced anything similar to what the protagonist, Ruby “Roo” Oliver, went through, but I can sympathize.

2. The writing was straightforward and simple, and given that it was told in the first person POV, the narrative was exactly like how a 16-year-old would have written it.

3. The situation that Roo found herself in elicited not only feelings of sympathy from me, but also disgust and outrage at the people she called her friends. I was affected by it! I was so angry for Roo!

4. In between the outrageous and the (sometimes) annoying, there was also the hilarious: Roo's mom, Elaine, a performing artist, having a show where she talked Roo first having her period, for example. It must have been humiliating to have your first period and having your own mother telling the world about it, but it's hilarious at the same time, when you think about it.

5. Although the ending could have been so much better, in my opinion, I thought that through her experiences, Roo has learned an important lesson in her young life.  I thought it was wonderful that within the period of an entire school year that she became part of the “in” crowd, had a cool boyfriend, was later on ostracized and called labels (“slut”, “leper”), and had panic attacks which required the shrink appointments, she had truly matured.


1. I hated the footnotes! They tended to distract me from the narrative, especially footnotes that took up half of the page or continued on to the next.

2. While it was probably necessary that the Roo's story was not told in chronological order, the author having resorted to a see-sawing between the past and the present in order to construct Roo's timeline, it nonetheless annoyed and confused me at times. There was a lot of overlapping of events, in fact, necessitating an explanation of the chronology of events from time to time. (“That was the Friday after the dance, so that would be one week before the so-and-so and three days after the so-and-so.” Something like that.)

3. I hated Roo's friends. Loathed them. Especially that Kim. GRRRRR!

I don't believe that you have to be able to relate to the characters of a book in order to appreciate it, and The Boyfriend List is a perfect example. Although I couldn't relate with any one character in it, I liked it because of the social issues that it dealt with: teenage angst, peer pressure, first love and heartbreak, ostracism, labels. Having said that, I would recommend this book to anyone who wants to take a trip down memory lane, back to their own high school years, and remember. :)