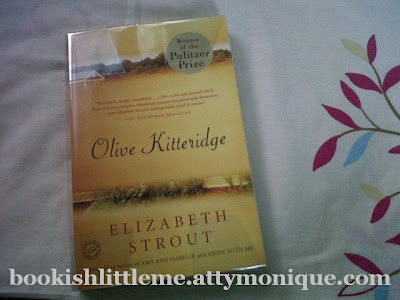 This is the first time that I've read a work by Elizabeth Strout, and a Pulitzer winner at that. Unfortunately, I couldn't make a categorical statement that it will not be the last.

Olive Kitteridge is actually a collection of stories of various characters from Crosby, Maine who, in one way or another, has crossed or crosses paths with Olive Kitteridge. Yes, Olive is the central character of the book, and she is mentioned in every story/chapter. Just as I had written on one of my Goodreads status for this book, mimicking an old commercial for a growing-up milk starring a smart little girl named Shaira: “Olive Kitteridge is the center of the solar system. Moving around her are the other characters of the novel...”

It is easy to understand how this book could be easily appreciated: I think its central theme, really, is the celebration of life, even in the twilight of one's years. Whether it be a lost love, an eating disorder, thoughts of suicide, or family relations gone wrong, the novel all boils down to that – the celebration of life.

So what was my problem with it?

I hated Olive Kitteridge herself. She is a generally difficult woman to be around with – even her husband, Henry, and only son, Christopher, seemed to be walking on eggshells whenever she was around. She is highly temperamental, quick to anger, and indescribably rash, even when she attempts to express love. The regrettable part is that she is supposed to be the one to tie and connect everyone's stories together, and so because I didn't like her all that much, the novel lost whatever appeal it offered for me.

And then, there's the melodrama. I've read other books with atmospheres that were morose, melancholic, or sad, but which I didn't find wholly depressing. With Olive Kitteridge, however, it was 270 pages of pure, unadulterated melodrama. It felt like I was watching various episodes of a drama series on TV. Despite attempts to remember any one story that stood out because of its poignance, my mind draws a miserable blank.

In fairness to Elizabeth Strout, however, it has to be said that she writes beautifully. That, and the fact that the book spoke about relevant issues in society, I think, are the book's redeeming factors for me.

Anonymous said…
Hahaha, I jumped to reading what your problem with the book is. I imagine how I'd react to Olive. I like sad books, but difficult women? Hmm.
March 2, 2012 at 12:07 PM

It's a sad reality, for there are so many good short story collections out there. I really loved Wells Tower's Everything Ravaged, Everything Burned, which I think came out the same time as the one by Strout.

Although I haven't read the anthologies that you mentioned, I appreciate short story collections, too. I must say however that my experience with short story compilations is limited to Neil Gaiman, and I'm planning to read some Ray Bradbury, too. :D
March 7, 2012 at 6:31 PM