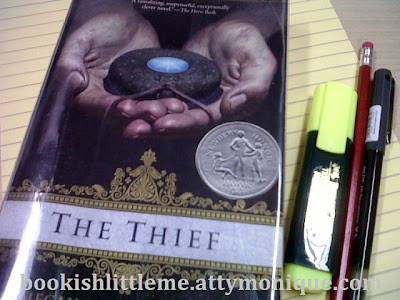 It's been a while since I picked up a YA fantasy book, and blogger-friends who have previously read The Thief have nothing but high praises and good words for it, so I knew that there was no reason for me not to like the book. Try as I might, however, I couldn't quite grasp the reason for these accolades. Yes, The Thief was a good, enjoyable book, but it wasn't that good, for me.

Eugenides, or Gen, who was named after the god of thieves, lands in the king's prison after bragging that he can steal anything. The same king, however, through his magus (or advisor), will later require Gen's unique talent for something beneficial to him, and so sickness-stricken Gen is hauled out of prison and travels with a small party led by the magus to the far-off kingdom of Attolia. Gen is expected to retrieve – okay, steal – an important artifact of legend for the King of Sounis. (Or, Sounis himself, since names of the monarchs seem to be taken from the name of the kingdom they rule.)

To say that the plot moved too slow, in my opinion, would be an understatement. While reading the book, I could practically hear my brain chanting, pick-up-pick-up-pick-up-pick-uuuup. Halfway through, and still I thought there was nothing in it for me. The story-telling involving legends, gods and goddesses provided by the members of the traveling party, especially magus and Gen, in between their days-long travel across hillocks, valleys and seas of olives, did nothing to help the turtle-paced storyline.

At the end of the book, what would appear to be the Big Twist that's supposedly the reward for having slaved dragged read through practically ¾ of it is just too anti-climactic. More than anything, I was just relieved that I've come to the last part.

The redeeming factor that The Thief had for me was the imaginary world made up of the kingdoms of Sounis, Eddis and Attolia, and the people's deities which were all inspired by Greek mythology, as admitted by the author herself. I have always loved mythologies and European history, especially that of Greece. Building a fantastical world with kings and queens commingled with modern details, e.g., guns/rifles, is a wonderful idea, too. Even the characters' names were Greek-inspired (Eugenides [which reminds me of my favorite author Jeffrey Eugenides, who traces his roots in Greece], Sophos), I was waiting if there would be any mention of moussaka somewhere.

In sum, The Thief was simply okay for me. The plot wasn't exceptional but not all that atrocious either, the writing was understandably juvenile, and I did enjoy the Greek-inspired setting. I have a copy of its sequel, The Queen of Attolia, right here, which I will probably read sometime next year.