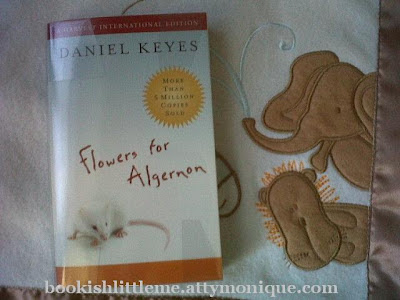 "..the men of the cave would say of him that up
he went and down he came without the eyes..."

There hasn't been a book - so far - that has moved me to tears like Flowers for Algernon did. I still had several pages to go before the end of the novel, but already I was clumsily wiping my eyes and runny nose, concealing my face from my husband lest he think me silly for crying over a book.

Flowers for Algernon is about Charlie Gordon, a 33-year-old mental retardate whose (in)capacity makes him perfect for an experimental surgery to increase intelligence. The experiment was highly successful in the case of Algernon, a lab mouse. After Charlie's surgery, the results seem to be exactly the same as that of Algernon – Charlie becomes so brilliant that he learns 20 languages and even eclipses the intelligence of the surgeons responsible for his operation... until Algernon begins to show signs of deterioration. It makes Charlie wonder if the same fate will befall him. The novel reminds me a lot of the 90's movie, Awakenings, which starred Robin Williams and Robert DeNiro. Yes, it also made me shed tears. Buckets. The plot of this movie is somehow similar to that of Flowers for Algernon: survivors of an encephalities epidemic during the 1920s, who have become catatonic ever since, are “awakened” by the administration of a new drug discovered by a physician, played by Robin Williams. De Niro, on the other hand, played the role of one of these catatonic patients (and really, really well at that). I won't reveal how the movie ended lest I spoil the ending of Flowers for Algernon, too, so I'll leave it at that. Suffice to say, however, that Awakenings was as heart-rending and dramatic as Flowers for Algernon.

And no, it's not because I'm a crybaby. They really are touching.

Daniel Keyes wrote this novel using the epistolary style – Charlie was made to write “Progress Reports” by the doctors in order to document and keep track of his mental development. The “Progress Reports” began from when he was a feeble-minded cleaning/errand boy at the bakery where he worked, and went on to describe in detail how he lived his life before and after the surgery. Essentially, the novel is Charlie's journey to self-discovery, to acquiring knowledge and recognizing his history, to life itself – for once, Charlie is not just the little boy looking out the window into the outside world, but becomes part of that world.

What tore at my emotions was the point in his life when he began to recall his childhood – his parents and younger sister, Norma, and episodes from the time when they realized that Charlie was no ordinary boy. As a result of the successful surgery on Charlie, he began to remember snippets from the past, which he didn't even realize were there, in his subconscious, just waiting to be recognized. It pinched my heart as I read how Charlie came to terms with his past, and the people who were largely responsible for the memories that came to the surface.

While admittedly, it was effortless to predict how the novel would wrap up (also because of the similarity to Awakenings), its brilliance and appeal were not diminished in the least. Even now, when I stop and remember Charlie, and how he lived out his life before and after the experimental surgery that made him smart, I can't help but get teary-eyed. The jurors who bestowed the Hugo and Nebula awards to the novel must have been moved to tears as well, I bet.

Finally, let me share with you one of the most poignant passages from the book, and one of my favorites. This was spoken by Charlie to Dr. Strauss, one of the surgeons who performed the operation:

“Intelligence is one of the greatest human gifts. But all too often a search for knowledge drives out the search for love. This is something else I've discovered for myself very recently. I present it to you as a hypothesis: Intelligence without the ability to give and receive affection leads to mental and moral breakdown, to neurosis, and possibly even psychosis. And I say that the mind absorbed in and involved in itself as a self-centered end, to the exclusion of human relationships, can only lead to violence and pain.”


Flowers for Algernon is all heart, and I love it.

Peter S. said…
Hello, Monique! I just read this novel recently, and I really, really liked it as well. I always thought that the sci-fi elements in this novel would be daunting since it won the Hugo and the Nebula. Surprisingly, I found it very accessible. I love the drama that played out in the end. So heartbreaking!
May 25, 2012 at 11:43 AM