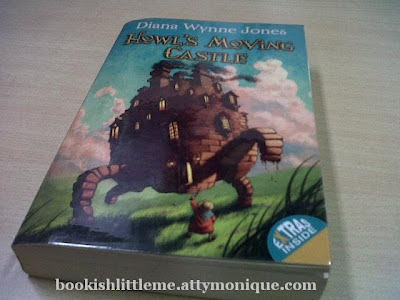 For the first time in a long time, I have no thoughts to write about a book I've just read. And it's not because I loved it, or even hated failed to appreciate it. I think I've just met a book I actually have no opinion of. To sum up the experience, the word “blah” would be appropriate.

Howl's Moving Castle is about, well, the Wizard Howl's (literally) moving castle. It's bewitched, see. Sophie, the eldest of three girls and who was, therefore, fated to be a failure (okay, I didn't get that), finds herself an old lady by virtue of a spell cast upon her by the Witch of the Waste (West? Oz?) and so, she attempts to seek help from the Wizard Howl for her to be changed back into her youthful self. Unfortunately, she also inadvertently gets into the middle of a tiff between the Wizard Howl and the Witch. The story basically revolved around Sophie, Howl, Howl's apprentice Michael, and Calcifer, Howl's fire demon who supposedly controls the moving castle and Howl's powers.

Apart from that, I have nothing more to say about the book.

Blah. Maybe I just didn't get it?

I think that's the reason why I don't like to buy Jones' works before and after she died because as you said, I don't know what to do if I have to write a review to a book I failed to appreciate and loved. It's blah! Nothing to talk about...
June 4, 2012 at 4:04 PM

Peter S. said…
Ay, I have the exact same sentiment. After reading this book last year, I thought, "Well, that was that." It just felt flat, in my opinion.

Maybe I would appreciate it more when I read it sometime in October, as the book club is supposed to discuss this book as well as House of Many Ways and Castle in the Air.

This is my first DWJ book that I've read. To say that I have no strong feelings toward it would be an understatement.
June 5, 2012 at 10:39 AM

Monique said…
KWESI: I know right... it's so disappointing, and it feels like I wasted my time. Blah.

PETER: Maybe I should join your discussion on this book? Haha. There might be some insights about it that would shed light into my otherwise lukewarm opinion of it.

Tina said…
Haven't read this yet. Chachic and Honey gave good reviews for this, and so far what Chachic liked I also like. So...I can't offer any opinions yet. Haha but hey, no worries -- maybe it's really not made for everyone. :)
June 5, 2012 at 11:32 PM

Monique said…
TINA: Hindsight, the book was just too a tad too juvenile for me. Don't get me wrong: I love my middle-grade classics like Charlotte's Web and The Tale of Despereaux, but for some reason, this one just felt too... empty. There's really nothing there. :(
June 6, 2012 at 9:04 AM