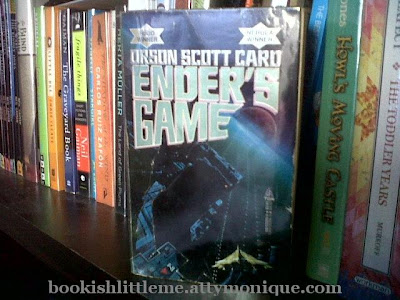 "This is the Third Invasion."

This statement was what clinched it for me. After plodding through the novel – yes, I struggled and plodded through all the battles and seemingly repetitive situations in which Ender, the young protagonist, found himself, for reasons I will explain hereunder – I finally got it. And at that moment, I realized why Ender's Game is considered such a gem by sci-fi readers. And it was at that moment when my brain did what it automatically does when confronted with a great, completely unexpected twist in the end: go on auto-rewind and reassess everything that I've read, connect the dots, tie up the loose ends, and try to appreciate the entire picture presented.

Ender Wiggin is only one of many geniuses sent to Battle School to prepare for the next war with the buggers. He was only 6 when he left, but has done and achieved a lot that no normal adult would ordinarily have done.

My husband says that he admires Ender's battle strategies and tactics; after reading this, I think I do, too, but it's tall order for me to actually think they'd have any immediate application in my life. :P

So. Why the “struggle” to read this? Many reasons. First, I am no fan of aliens; in this book, they're called buggers. Ever since I became aware of them, my eyes glaze over when people start talking about UFOs, space battles, inter-galactic or spatial whatchamacallits. (So it's no big surprise if I say I don't appreciate Star Trek, Star Wars, or other similar Star-geeky show/movie/series. And don't tell me I'm missing half of my life; it will fall on deaf ears.) So I had to really muster the strength and interest to sustain my reading of this book. Second, nothing seemed to be happening for practically the entire length of the book. Nothing significant, at least. All that seemed to be going on was Ender going to games, Ender being bullied left and right, Ender getting manipulated into doing stuff, Ender being pushed left and right by the teachers. (My blood boils whenever I remember Colonel Graff and Major Anderson, yes.) The memory of it makes me stifle a yawn, even now. Third, I had a difficult time imagining the battleroom, with its null gravity, and so I found it also hard to picture how the games went, or how Ender's strategies were put into action. All I know is that Ender was spectacular, and that was it.

And so, upon finishing the book, I think I surprised myself when I found myself getting attached to Ender, sympathizing with him, and yes, actually liking the boy. There were many things that Ender had gone through, but he emerged from it all whole; maybe not completely unscathed, but nonetheless still his own person. Not many kids would be put through so much – but then again, Ender is no ordinary boy now, is he?

If you're after the prose, stop and just pick another book. This is no literary treat for beautiful prose-loving readers. It is, however, readable, and what it lacked in the prose aspect, it more than made up for in terms of psychological manipulation, battle skills, and even the politics and the art of war. And the fact that I actually enjoyed a true-blue science fiction novel for the first time speaks a lot about how good this book is.

Peter S. said…
Hello, Monique! I just read this book this year and I really enjoyed it! I wasn't expecting that much from it really, but I was pleasantly surprised by how engaging it was. I also liked the coming-of-age aspect of it, although it's a bit unconventional.
July 10, 2012 at 9:57 AM