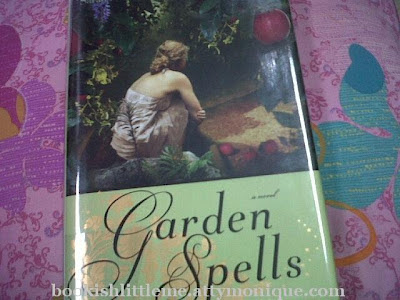 Garden Spells is easily one of the best feel-good YA books that I've read of late. I loved the element of magic, most especially, and was pleasantly surprised when I found I couldn't put the book down until I was done with it.

From the Goodreads summary (because after several attempts to write a decent summary, I found that I couldn't come up with one):

The women of the Waverley family - whether they like it or not - are heirs to an unusual legacy, one that grows in a fenced plot behind their Queen Anne home on Pendland Street in Bascom, North Carolina. There, an apple tree bearing fruit of magical properties looms over a garden filled with herbs and edible flowers that possess the power to affect in curious ways anyone who eats them.


For nearly a decade, 34-year-old Claire Waverley, at peace with her family inheritance, has lived in the house alone, embracing the spirit of the grandmother who raised her, ruing her mother's unfortunate destiny and seemingly unconcerned about the fate of her rebellious sister, Sydney, who freed herself long ago from their small town's constraints. Using her grandmother's mystical culinary traditions, Claire has built a successful catering business - and a carefully controlled, utterly predictable life - upon the family's peculiar gift for making life-altering delicacies: lilac jelly to engender humility, for instance, or rose geranium wine to call up fond memories. Garden Spells reveals what happens when Sydney returns to Bascom with her young daughter, turning Claire's routine existence upside down. With Sydney's homecoming, the magic that the quiet caterer has measured into recipes to shape the thoughts and moods of others begins to influence Claire's own emotions in terrifying and delightful ways.


As the sisters reconnect and learn to support one another, each finds romance where she least expects it, while Sydney's child, Bay, discovers both the safe home she has longed for and her own surprising gifts. With the help of their elderly cousin Evanelle, endowed with her own uncanny skills, the Waverley women redeem the past, embrace the present, and take a joyful leap into the future.

The entire time I was reading this book, I couldn't help but think about the 1998 film Practical Magic starring Sandra Bullock and Nicole Kidman, who also played sisters in the movie. Just as Sally and Gillian Owens were diametrical opposites in Practical Magic, so were Claire and Sydney in Garden Spells. There is also the ever-present elder aunt/cousin/relative to help the sisters out once in a while: in the movie, there were Aunts Frances and Bridget; in the book, there was Evanelle, whose gift of anticipation, consisting in that uncontrollable urge to give someone something and completely not knowing what it was for, I most certainly wished I had.


There are a number of things that appealed to me about this book. I loved the relationship between Claire and Sydney: admittedly, they spent a good chunk of their time growing up apart, and were only thrown together – reconciliation to come a bit later – by circumstances and people. But I liked how they took their time with each other, supported one another in the most touching and hilarious ways, and eventually, bonded. As I said before, I also loved the element of magic – I've always been fascinated with magical powers and spells and witchcraft (but not to the extent of actually dabbling in or experimenting with it, no), and I enjoyed how, in this book, flowers and herbs and garden things added more fun to the mix. Of course, the pièce de résistance – the magical apple tree that seemed to have a mind of its own – was a delight in itself.

I also loved the very real characters: sheltered and uptight Claire, free-spirited Sydney, headstrong Bay, yummy steadfast Tyler, shy Henry, quirky Evanelle, and even sex-driven Emma, whose only fault was that she was constantly listening to her mother, who might as well have been pimping her own daughter by constantly doling out seduction advice (duh?). At this point, I note how most of the families or clans mentioned in the book had their own special “thing” - the Waverleys had their magic, the Clark women are seductresses and proud of it, and the Hopkins men gravitate towards older women and prefer them as partners. It suddenly made me think what my family's special thing is. Hee. :P

And yes, the love story/romance angle. The part where I had warm, fuzzy feelings, especially when I was reading about Tyler. Who cares if I'm in my 30s, married and with a kid? Fuzzy feelings translate to happy, and I'm happy, so fuzzy feelings, come on over and fill me full. :P

This is my first Sarah Addison Allen, and it will definitely not be the last. As far as YA books go, this is another one that suits my tastes perfectly.

Peter S. said…
Oh, I didn't know that this is YA! I keep seeing this in the Romance section. And then the other day at Fully Booked Greenhills, I saw it at the General Fiction section.

Someone from Goodreads corrected me and claimed that this isn't YA. I said I associated it with YA because the people I know who have read this are primarily YA readers, so there. :)
July 20, 2012 at 9:58 AM