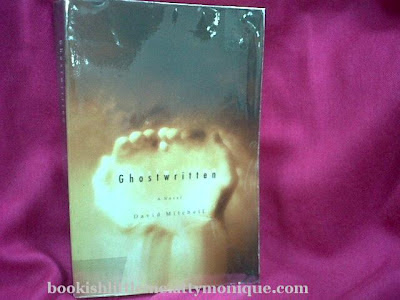 You will have to excuse me: this is David Mitchell, so I apologize in advance for the fangirling. Thank you. Er, you've been warned.

In February of this year, I read the awesome novel that is Cloud Atlas, and I have never stopped raving about it since. I was so amazed at the brilliance and talent of David Mitchell that if I could, I would get all of my friends copies of this fantastic, wonderful work, so they could also read it and share my admiration for its author.

This time around, I read Mitchell's debut novel, Ghostwritten, and I expected to be blown away just as much as when I read Cloud Atlas. I wasn't disappointed.

Because I read this simultaneously with my uber-favorite reading buddy, Angus, and a book club newbie, Mae, I will no longer attempt to deconstruct the novel on a per-story basis. See, Ghostwritten is structured as a sort-of compilation of short stories about 9 characters scattered all over the world, whose lives are serendipitously interconnected. It's like a novel demonstrating six degrees of separation, but with class and brilliance, with mystery, adventure, mysticism, romance and drama scattered in. Personally, I think this novel was the springboard for Mitchell's subsequent stellar work, Cloud Atlas, especially since there were direct references to some characters that appeared in the later novel (Timothy Cavendish, Luisa Rey).

The first story is set in Okinawa, Japan. From there, we are taken on a journey all around Asia and then to Europe: Tokyo, Hong Kong, (mainland) China, Mongolia, Russia, Great Britain, Ireland, and then back again to where it all started - in Japan. The chapters' titles are all named after the place where the story is set. The variety in places, by the way, is as ingenious as the characters whose story is being narrated. But my favorite chapter (and I'm sure Buddy will also cite it as his), hands down, would have to be Mongolia - I love the fact that the narrator is not your usual character, that his story had adventure, mystery and drama in it, and that it came in full circle. Oh, and the Mongolian folklore! I loved those, too, and I would be really happy if I could get my hands on a book about them.

On the writing. I need not state what has long been settled: to borrow Buddy's words - I love how Mitchell writes his metafiction (and this has reference to the chapter called Mongolia). Mitchell writes fluidly, beautifully, and handsomely. He just has a way with words, you know? His thoughts are so clean and well-transitioned, he describes things so vividly that as you go along, you could imagine the scene clearly in your mind's eye. He's funny, too, and witty when it is required.

And, of course, the passages. I think I may have flooded my GR friends' timelines with my status-quotes every day for the last 9 days, but I can't help it. In fact, I've never dog-eared a book as much as I have my copy (which by the way, is a gift from - who else?? - Buddy!). This one I lifted off the chapter called Tokyo:

But seriously... well, love has got to be based on knowledge, hasn't it? You have to know someone intimately to be able to love them. So love at first sight is a contradiction in terms. Unless in that first sight there's some sort of mystical gigabyte downloading of information from one mind into the other.

And this one is from Hong Kong:

For the last few months I've been living with three women. One was a ghost, who is now a woman. One was a woman, who is now a ghost. One is a ghost, and always will be. But this isn't a ghost story: the ghost is in the background, where she has to be. If she was in the foreground she'd be a person.

And, finally, from Night Train:


It's a dilemma. If you knew what to do, it wouldn't be a dilemma. You choose one of the options, make your bed and lie in it. Laws may help you hack through the jungle, but no law changes the fact you're in a jungle.

So. Why is it called "Ghostwritten?" This is my take on it, which I lifted from our buddy-read thread: the reason why this book is called "Ghostwritten" is because, truly, Mitchell is ghostwriting for the various personalities whose stories are told in this novel. Take note that the chapters we've so far read are all in the first-person POV (and I'm willing to bet that all the others are, too - and even if they aren't, I am sure I can find out AND defend why they're not), which is consistent with someone who is writing for someone else. Notice, too, that the style and approach in which each chapter is written are perfectly tailored to suit the personality of the narrator.

"Who is blowing on the nape of my neck?"

David Mitchell, please visit the Philippines. It would be such an honor and a pleasure to meet you. Pretty please? :D

Anonymous said…
*brings out my placard of "I love David Mitchell!"

Oh my, I know I'm behind but I can't help reading this. And fangirling.

Speaking of metafiction, number9dream also has a set of fables in one of the chapters, so I'm pretty sure that you will love that as well.

(And when I saw that copy of Ghostwritten, I almost didn't want to give it to you because it's a Mitchell book, but I realized immediately that I should spread the word!)
July 3, 2012 at 2:27 PM

Monique said…
BUDDY: number9dream is next on my Mitchell list! :D