My book blog is turning 1 this coming July 26 (YAY!), and I have chosen this special occasion to (finally) implement what I've been cooking up for a while: a major facelift to the blog, consisting of a change in its name and, accordingly, a new blog header.

Why change the blog name? Well, for one, I would like to eliminate any direct reference to the blogger – uh, me. I must admit that when I set up this blog last year, I couldn't come up with a more imaginative or creative name. But since I was sooo eager to start it, I hastily thought of a name that would best describe who I am as a reader, hence, “bookish little me.” Yes, zero points for imagination there, but I've lived through it and used it for an entire year, so that should be sanction enough. :P

Since early this year I've been meaning to change the blog name to something less wordy (one or two words would be perfect, I think), more catchy and with more recall, and of course, something just a tad less narcissistic. (Don't we all commit a specie of this sin? Ah, vanity. My favorite sin!) I even asked one of my best bookish buddies for input – I considered Hodgepodge Bookshelf, Book Talk, Judging Covers, and so many others. This time, I wanted one that would best describe the kind of books that I read and not something that would describe me as a reader, because I wanted to shift the focus from the reader to the books. Waiting until the blog celebrated its first birthday to introduce the changes gave me additional time to mull things over because this major change will be the last – the book blog has already established its identity, I hope, and I wouldn't want further confusion by revamps whenever I feel like it.

So! Having said all those, let this post serve as notice to the regular readers of this blog that starting July 26, at 12 midnight, “Bookish Little Me” will have a new name. The big reveal will be on the day itself, so I won't be divulging the new name and banner yet, or why I chose it as my blog's new name. Its URL will still be the same – bookishlittleme.attymonique.com – for the benefit of those who have been very kind to link this blog to their own sites, so it won't be necessary to tweak their blogrolls anymore. I think I'd also like to maintain the URL as a sort of remembrance. Plus, I will also put up a separate tab entitled “Bookish Little Me” which will contain the old blog header, with the picture of one of my favorite books of all time, and a short story of how this blog came to be. 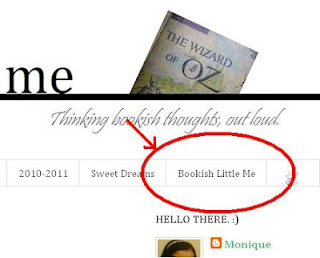 Finally, I will be hosting a blog contest/giveaway on July 26 in further celebration of the bloggy birthday – I am still pondering over the specifics and will announce it a few days prior. Who doesn't want a freebie, right? :P

Anonymous said…
One year? But it feels like you've been blogging for some time now! (Or am I thinking of your personal blog?)

More power! I still remember when you sent me an SMS regarding your blog name. I was on a "motoring trip" with my office mates then. I'm excited to find out your blog's new name!

BUDDY: That would be my personal blog, yes, which will be celebrating its 8th year this September! :)