That Kind of Guy 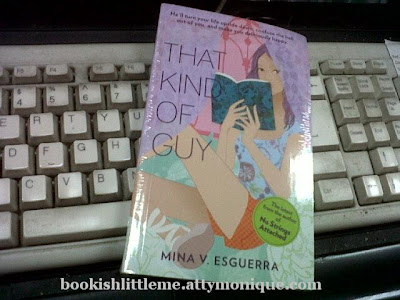 One thing that kept nagging at me as I breezed through That Kind of Guy over the weekend was: how manang is manang?

Julie, the female protagonist, was labeled a manang by her younger sister Andrea, probably owing to the former's rather conservative ways and the fact that she's NBSB (no boyfriend since birth). But when Julie was given Anton's number – how and by whom, will be explained later on in the novella – she was actually the one who dialed and called him up. And on the occasion of a simbang-gabi or midnight mass, during the early part of their casual dating phase, he managed to kiss her. On the mouth. And she let him. Well, I didn't read any part that said she resisted, or pushed him away. Now, if I were manang, I wouldn't do all those.

BUT. That little non-issue aside, I truly enjoyed reading That Kind of Guy. No, I couldn't relate to Julie, but I took pleasure in imagining how my life would be like if I were as paranoid and secretly scared of investing feelings in a guy as she was. Keeping track and collecting stories of a boyfriend's former involvements? My goodness. And by golly, if my own office staff pulled that stunt on me and tried to get me fired, I would be sure to make their own lives h-e-l-l.

I still think Love Your Frenemies is the best Mina V. Esguerra book I've read thus far. But this one, having been written very candidly, comes in at a close second. When I closed the last pages of the book, the thought that was running in my head was: I'd love to have a friend like Julie and give her a piece of my mind tell her to get a life share my personal experiences with her. There are a lot of Julie's around, I know, and it would me make really happy if they could find their own respective Anton's. [Just like I have mine. :P]