A Wizard of Earthsea (Earthsea Cycle #1) 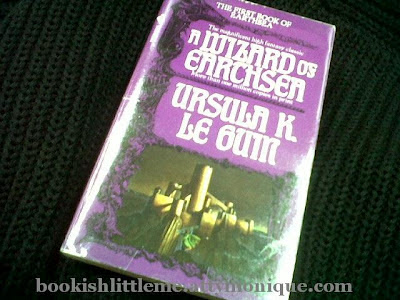 What's in a name?

Apparently, a lot. Everything, perhaps, when you get to read Ursula K. Le Guin's high fantasy classic, A Wizard of Earthsea. An enemy knowing your true name can mean the end of you, and so practically everything – living or non-living – go by another public name. Aliases, yes?

Sparrowhawk – or Ged, his true name – is a young wizard from the goatherding town of Gont whose budding powers were harnessed and polished in a wizarding school in Roke, in the Isles of the Wise. Once upon a time, when he was a small boy, he helped drive off the Kargad invaders with what little power he knew he had and some witchery he had recently learned from a witch aunt. Thus, he caught the attention of Ogion, an old wizard, who eventually sent him to Roke to learn what he can about their arts. However, prior to his journey by sea to Roke, Ged inadvertently unleashes a dark creature that will turn out to be his nemesis.

There are some who say that Harry Potter's character is patterned from Ged's, what with their many similarities (what they are, I will no longer elaborate). While admittedly, these similarities were there, and are indeed too numerous to be mere coincidences, it didn't affect me all that much. Perhaps because I've read the Harry Potter series years back (and liked it), and the comparison to A Wizard of Earthsea seems too inconsequential to dwell on at this time. (And hey, it isn't a bad thing to be inspired by older, more successful works, is it?)

I truly enjoyed this book. I am no hardcore high fantasy reader, but when I do pick books to read from this genre from time to time, I find myself immensely entertained and quite immersed in them. One thing I particularly liked about A Wizard of Earthsea is that it was fast-paced storytelling: the story began when Ged was all but a young goatherd and went by his childhood name “Duny,” and ended when he was a full-fledged 19-year-old powerful wizard. In all of 182 pages of my bargain mass-market paperback copy (I couldn't find a trade paperback), Ged's various adventures through the many islands of Earthsea had been tightly packed: dragons, sorcerers, magic, shadows, evil, Old Powers. You could argue that I'm too old for those, but I won't let you win. :P

A Wizard of Earthsea is a quick, easy read, but as a fellow book blogger and book club friend put it, it might be short, but the fantasy adventure was complete. I couldn't have said it better.

I really cannot understand why people sometimes dwell on the similarities of two books. I remember reading an article about Hunger Games being formatted from Battle Royale. I believe that books are really different from each other. No matter how common the theme is.

I love easy reads. I will definitely get this after I zeroed out the books on my shelf. Haha.

Yes, this is a quick, light read for a high fantasy book. I hope you'll also enjoy it once you get around to reading it.