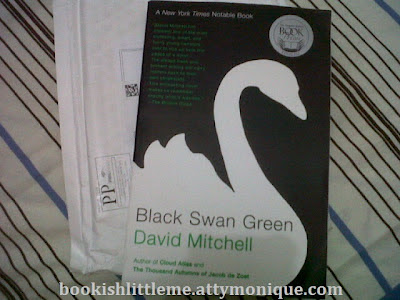 The British colloquialisms got me, and they threatened the stellar rating that I know this book deserves. I hated that I didn’t understand what I was reading (“I, Jason Taylor, was a grass” or “That was ace!”), and while I comprehended them, somehow, through the context in which they were used, I thought there wasn’t anything wrong with Googling them, either. In the process of reading through the Wikipedia entry for this novel, I discovered that Black Swan Green was David Mitchell’s semi-autobiographical work – his bildungsroman. I also confirmed what I read from a bookish buddy’s write-up that our dear Mitchell was – is – a stammerer. Like his teenage narrator from Black Swan Green.

Unlike the first two books by Mitchell that I’ve already read, Cloud Atlas and Ghostwritten, which were told from the first person POV of different narrators whose lives, as it would turn out, were interconnected, Black Swan Green has only one narrator, 13-year-old Jason Taylor, who recounts, in 13 chapters representing the 13 months spanning the period from January 1982 to January 1983, his rise and fall in the popularity game among his peers, his family woes, and his very first recognition of the opposite sex. While Jason wasn’t exactly a charming character, it was very easy to relate to him and sympathize in his plight.

I cheered him on when he got a note from the Spooks and successfully hurdled the initiation test, and my heart broke when he dropped one rung after another in the hierarchy of the popular. I felt indignant when he was continuously bullied because he stammered on S and N words, and got frustrated when he felt he had to do good rather than take revenge on the ringleader of the bullies. I felt sad about the fate of his family, but was hopeful that he will face his future with an open mind and a strong disposition.

It took me a while to get used to the structure, which was very unlike Cloud Atlas and Ghostwritten. But it was effective. The end of each chapter left something unresolved in the story, like that first chapter with the “sour aunt” that concluded without me knowing what happened to Jason while he was in the house in the woods. But everything tied up very snugly in the end, and I guess I shouldn’t have been surprised. The Mitchell style, however, of writing the prose in the manner in which the narrator himself would have written it, is present.

It was fun to “meet” familiar characters from Mitchell’s other books, as well. Madame Eva van Crommelynck from Cloud Atlas was Jason’s French and poetry teacher of sorts. On one of Jason's visits to the vicarage, where she was staying, she played a vinyl copy of Robert Frobisher’s Cloud Atlas sextet.  A younger Neal Brose appears as one of Jason’s tormentors, and those who have read Ghostwritten will remember him as the Brit lawyer with the money-laundering activities from the old British colony, Hong Kong. Encountering them again makes me want to say, “Hey, fancy meeting you here!” exactly like I would tell an old friend. Because to me, that’s what they are. :)

Despite the colloquialisms, however, I loved Black Swan Green. Not because I am a huge, huge Mitchell fan, but because it spoke about very relevant issues for teens: peer pressure, popularity, bullying, a sense of belonging somewhere and with someone. I know, I am way past that age when these issues are relevant to me, but I have a little girl who will eventually reach that stage in her life, and one can never be prepared enough in dealing with these situations.

Oh, and by saying, “I, Jason Taylor, am a grass,” Jason meant he was an informer, and “ace” simply means “excellent” or “wonderful.” :)

This book is just ace!

Anonymous said…
My goodness! I just reread my write-up and found too many errors. Thanks! At least I was able to correct them, hihi.