The long weekend has been book-filled for me. As I mentioned in my previous post, I attended the 2nd ReaderCon last Saturday, as a volunteer this time (I was part of the Registration Team, headed by the one and only Kyusireader, Peter), which was held at the Filipinas Heritage Library in Makati City. During the socials, just before the event was concluded,  tons of books were raffled off, and I won for myself a local book/journal written by Vicky Veloso-Barrera entitled From The Kitchen To The Heart. I also scored a couple of children's books from Hiyas, Tree For All and The Great Duck and Crocodile Race which my bookish buddy, Angus, actually won and which I filched asked to have. Thanks, Buddy! 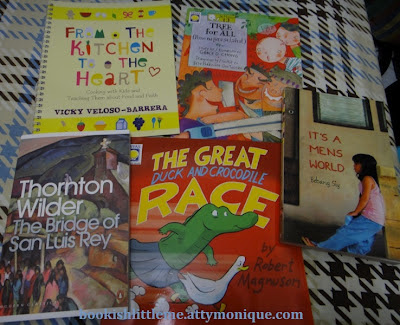 Last Friday, too, a parcel from Book Depository was waiting for me in the mail, and I knew before I opened it that it contained Thornton Wilder's The Bridge of San Luis Rey. Isn't the cover so pretty? :)

For the last book, I scoured National Book Store just this evening, before going to the gym, for a copy of Bebang Siy's award-winning work, It's A Mens World, because it won in last Saturday's very first Reader's Choice Awards. :) And I needed to satisfy my curiosity! :P

Finally, isn't this book accessory - I mean, an accessory that is a book - so dandy and cute? I bought it from Shani during the ReaderCon, as a memento of the event. It is now one of my favorite burloloys. :D 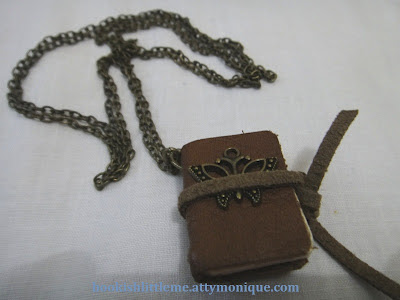 Anonymous said…
I actually wanted to ask for that Kitchen book, but I think you'll need that more than I do. Not that I'm saying you can't cook, but you being a wife and a mom, you might find it more useful than I do. :D
August 22, 2012 at 1:52 PM