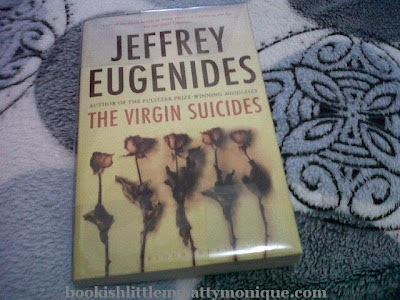 This is one of those books for which I could not find words apt enough. My apologies, in advance, if I am unable to give justice to the beauty and relevance of this novel.

Jeffrey Eugenides is one of my favorite authors. Ever since I read Middlesex last year, I was hooked. I also read his latest work, The Marriage Plot, and loved it as well. I can't recall now why I put off reading this last Eugenides - his debut novel - but I am glad I've finally gotten around to doing so. It  turned out to be one of the most emotionally engaging novels I've ever had the pleasure of reading.

The cover of my Bloomsbury edition of The Virgin Suicides depicts five withered roses. Five roses representing each Lisbon girl: Cecilia, 13; Lux, 14; Bonnie, 15; Mary, 16; and Therese, 17. Five girls who had their whole lives ahead of them, waiting to be claimed, but which they all chose to forgo. Instead, they opted for an abrupt end to their secret miseries, selfishness and self-concern blinding them.

The Virgin Suicides was eerie, haunting, morose, and heartrending. It left me with a particular heaviness inside that can only be associated with loss, but I welcomed it. In fact, I allowed myself to wallow and grieve, for just a bit. In the few days that I immersed myself in the Lisbon sisters' collective and individual stories, I went through a roller-coaster of emotions: sympathy for the parents, annoyance at the gossiping neighbors, hatred for the media vultures who twisted every single thing. I felt hollow and helpless for the devastation and self-decay in which the Lisbons permitted themselves to be sucked in, manifested outwardly by the physical deterioration of their own house.

Suicide has always been both a sensitive and baffling subject. Sensitive, because it deals with self-inflicted death, always fraught with violence no matter the means or method, in my opinion, and baffling, because the only thing it leaves the victim's families and loved-ones are big, fat WHY's. Recently, our family dealt with one of these suicides, the first (and hopefully the last), and no one can truly answer - not even the boy's parents - why he ended his own life. It will always be an enigma to us.

No, the idea of taking my own life never crossed my mind, not even once - not even during what I would consider to be the lowest point in my life. Yes, I would answer hypothetical questions regarding the manner of death I would choose if ever I would commit suicide (drugs/medicine overdose), but that's about it. Because of my Catholic upbringing, I firmly believe that suicide is a mortal sin. To quote the book, these are decisions better left to God.

Since this is Eugenides, I need not say that I love the prose.

"Whatever the details, Mr. Lisbon became the medium through which we glimpsed the girls' spirits. We saw them through the toll they exacted on him: his puffy red eyes that hardly opened anymore to see his daughters wasting away; his shoes scuffed from climbing stairs forever threatening to lead to another inert body; his sallow complexion dying in sympathy with them; and his lost look of a man who realized that all this dying was going to be the only life he ever had.


My favorite character, oddly, is not one of the Lisbon sisters; it's Old Mrs. Karafilis, a neighbor. From our read-along thread:

One character that stood out for me was Old Mrs. Karafilis, the Greek grandmother of one of our narrator's friends, who has been waiting for the longest time for death to claim her. She was described as one who spent all her time in her cellar room and didn't bother much with neighborhood gossip, but seemed to take a special interest in the Lisbon girls. I thought how she and the Lisbon girls were diametrical opposites of each other - Old Mrs. Karafilis, who has lived a long life, now (im)patiently waiting for death to come, but never considering ending her life herself, on the one hand, and the Lisbon girls: young, with their entire lives and futures waiting for them, and inviting death to come to them, on the other. I love how, through Old Mrs. Karafilis, the author has illustrated the polarity of their situations.

I also realized the many meanings for the deaths to be called "virgin suicides."  There's the fictional song and band, and there's the laminated pictures of the Blessed Virgin that can be associated to the girls. It seems ironic that, despite their apparent Catholic faith, the girls would act the way they did - or perhaps, it is precisely this faith (or lack thereof?) that impelled their decisions?


Finally, here's a poem by Christina Rossetti, a Victorian poet most known for her poems about death and dying. She was mentioned in the book, as well.

REMEMBER me when I am gone away,
Gone far away into the silent land;
When you can no more hold me by the hand,
Nor I half turn to go, yet turning stay.
Remember me when no more day by day
You tell me of our future that you plann'd:
Only remember me; you understand
It will be late to counsel then or pray.
Yet if you should forget me for a while
And afterwards remember, do not grieve:
For if the darkness and corruption leave
A vestige of the thoughts that once I had,
Better by far you should forget and smile
Than that you should remember and be sad.


Buddy read thread here, where Buddy, Maria and I (and Kwesi, supposedly) extensively discussed the novel in accordance with a reading plan.

Peter S. said…
Hi, monique! I've read this years ago, so naturally I couldn't remember anything. I do remember being depressed after reading it. But I have to agree -- this is Eugenides after all, so the prose is beautiful.
August 10, 2012 at 11:32 AM

Monique said…
BUDDY: What took you so long?! I've been a fan since Middlesex! :))

PETER: I will echo what Angus said in his write-up about the book: that the writing is incandescent, you'd end up highlighting the entire text if you were to pick the beautiful parts. :)
August 14, 2012 at 9:34 AM