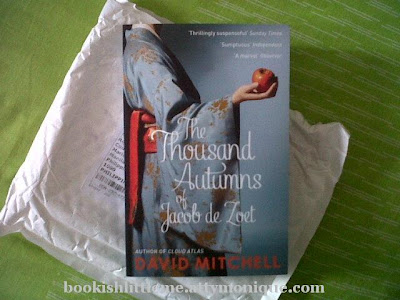 If you didn't know it yet, then let me inform you now: historical fiction has a special place in my heart.  I've always had a certain fascination for history - of how things came to be - and so when writers marry that with fiction, which I prefer for leisure reading, then I'm in for the long haul.

The Thousand Autumns of Jacob de Zoet is David Mitchell's awesome, awesome take on historical fiction - Japanese history, to be exact - and I am amazed by it. It is structurally and thematically different from Mitchell's four previous novels (Cloud Atlas, Ghostwritten, number9dream and Black Swan Green, all of which earned perfect 5-star ratings from me) but it is no less marvelous and spectacular. Quietly spectacular, that is.

I am no good at writing book summaries, considering my penchant to ramble on, so I will just describe the setting of the novel in the following manner: it is set in Japan in the late 18th century, at a time when the Dutch had sole control of the trade between the West on one hand and the East on the other. Our Dutch protagonist, Jacob de Zoet, is the resident clerk and bookkeeper for the small group of Dutch foreigners who have taken up residence in Dejima, a man-made island off Nagasaki. Throughout the narrative, we encounter other characters - Dutch, Japanese, and British - who take part in a grand rigodon of betrayal, corruption, deceit, greed and power.

Confession: I plodded through the first part of this novel. Sure, the historical aspect interested me. Sure, the love story gripped me in a way that only Mitchell can, for Mitchell writes the most beautiful and poignant love stories. But I had a slight problem with the pacing in the first parts of the book. The very first chapter, in which the Japanese midwife, Orito Aibagawa, was introduced, was quite promising. But the succeeding chapters, which veered away from Orito and focused on the nitty-gritty of the Dutch trade and their Japanese hosts, took a while to lasso me in. It didn't help that I had the most difficult time keeping tabs on the characters' names, so much so that I had to print out a cheat sheet to help me out in my reading. :D

But that little bump along the way remained to be just that: a negligible tiny thing that cannot possibly take away or destroy the quiet beauty and poignancy of The Thousand Autumns of Jacob de Zoet. It reminded me once again why I love Mitchell's writing: it demonstrated the clarity, versatility and occasional flamboyance that is Mitchell's prose. At the same time, it afforded me the opportunity to take a glimpse into the rich tradition and culture, as well as the colorful history of 18th century Japan, of which I admittedly know very little. Don't you just love discovering these nuggets of history from among the pages of a beautifully-weaved fictional novel?

I also loved the humor that Mitchell injected in the narrative, and I appreciated more that fact that these were incorporated in the first parts of the novel. How can a first meeting with a future love interest be any more memorable than with a monkey named William Pitt pissing right in your face, right? Is there anything more hilarious than a couple of musicians, aptly named Cupido and Philander, singing about "one's true love"? Chuckles, chuckles, and more chuckles at practically every turn of the page, and I am hopelessly into the plot.

My favorite part is the last chapters of the novel, where Jacob, in the twilight of his years, looks back in reminiscence at the events and memories that made up his life. It is the silence and peace extant in these chapters that  made my heart bleed for and on behalf of Jacob, the epitome of resilience and faith in the most trying of times...

"Faith shall save your Soul from Death... with Faith, Death is nothing worse than the end of this voyage we call life, and the beginning of an eternal voyage in a company of our Loved Ones, with griefs and woes smoothed out, and under the captaincy of our Creator..."


This is my fifth and last Mitchell book, and I read this simultaneously with my book club friends Angus, Bennard and Mae. And I am happy to report that we all gave perfect ratings for this book.

David Mitchell, you can't not visit the Philippines now.

Peter S. said…
Woot woot! Another Mitchell! Am I the only one who hasn't finished a Mitchell work? And to think that I have all his books! Hehehehe.
October 9, 2012 at 9:29 AM

I loved Mitchell's humor in this book! It's subtle and deadpan. Very British.:)