It's my birthday month! :D


Forgive the over-excitement, but since this is actually my first post for November, which happens to be, well, my birthday month, I just had to shout that out. Yay! Also, my very first attempt at moderating a book discussion - on- and offline - is also happening this month, so double yay! Are we excited yet? :)

As per usual, the titles that comprise the reading list for November were chosen haphazardly for the sake of variety. Two titles were no-brainers, as I wanted to go thematic (you know, Halloween and all), while the other two were picked for me by my bookish friends via a Twitter conversation. But before I proceed to the November reading list, here's a recap of October:


Eeep. It looks like another book will be joining my ever-increasing reading lists backlog, which stands as follows:

Of course, I know I will pick these books up and read them eventually. As to when that will be, however, is the bigger question.

Anyway, on to this month's reads! 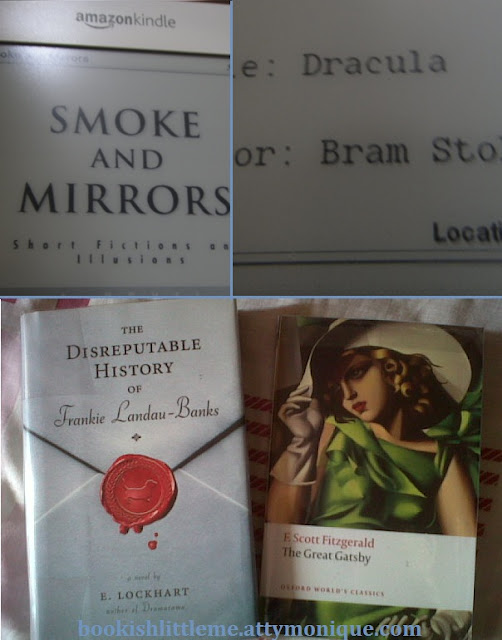 I will be quite busy preparing for my "show" in a couple of weeks, but I'll definitely try to squeeze in some reading in between formulating questions and moderating the online discussion. Any thoughts on this month's choices for the reading list? :)

*Not included in any reading lists, as I learned about it a mere couple of days before I downloaded and read listened to it. :)
Email Post
Labels: David Mitchell Neil Gaiman Required Reading

Peter S. said…
Hi, Monique! Ah, Pride and Prejudice, the one book that I have repeatedly attempted to finish. :-)

I also want to read The Great Gatsby before the movie. At the rate I'm going, I know I will not read it soon.:)

Anonymous said…
Smoke and Mirrors is my favorite collection of Neil Gaiman's stories. Although I liked Snow and Apples very much, my favorite story would still be We Can Get Them for You Wholesale.:)

Monique said…
LYNAI: Hmm. I'm curious about the book now more than ever. :)

BUDDY: Really? Well it's a short book anyway. I'll read it na lang din and then just wait for Leo and Tobey. :D

TINA: I can't wait to read the Frankie book as well! Oh, now I don't know which one from the list I'll pick first, haha!

Maria @ bookchilla said…
Go, Monique! Tina and I have different taste in contemp sometimes, so you decide :) Happy birthday!
November 10, 2012 at 11:17 AM