Far from daunting, the sheer length of this book was actually a challenge. I can’t remember the last time I picked up a novel this long – I remember having read Ken Follett’s The Pillars of the Earth way back 2010 (and absolutely loving it), but that was it. So when a good friend book-pushed gifted me with a copy of Jonathan Strange & Mr Norrell last Christmas, I knew I was up for some chunkster reading soon.

Jonathan Strange & Mr Norrell are English gentlemen magicians, but that is the only thing they have in common. An old nut who relied too much on books on magic, Mr Norrell was focused on eliminating theoretical magicians from the face of England (without necessarily murdering them, right) and in single-handedly resuscitating English magic, while Jonathan Strange was a young, brash practical magician with immense talent and potential. Time and circumstance will throw these two magicians together, and into the mix we toss in the legendary and formidable (but long deceased) Raven King, fairies good and bad, human and fairy histories, European wars, a prophesy from an apparently bogus magician, a bunch of supporting characters (useless or otherwise) and lots of footnotes (again, useless or otherwise).

The first few chapters were quite interesting. Displays of magical prowess were amazing, and it egged me on to read more (not to mention the fact that I was reading this together with a few friends from the book club, and that we gave ourselves a whole month to finish it). The prose is old English, which was not at all difficult to read or process; on the contrary, it lent more romance and credibility to the setting, which was during the height of the Napoleonic wars in Europe in the 1800s. This particular historical period is significant in the plot: as the British waged war against the French, the possibility of using magic in warfare – to be provided by Norrell, initially – was entertained.

The story was engaging, yes. Susanna Clarke had a way of making the reader thirst for more, and the only way to slake that thirst is to plod on. With plodding on, I have absolutely no problem. I am all for taking the time to build the foundations of a good, solid story. But to meandering storylines, or completely unnecessary ones that do not contribute at all to the establishment of the plot and serve no other purpose than to increase superfluity – to these, I shake my head and fists.

JS&MN was an immensely enjoyable read, do not be misled. I loved the magic, the spells, the histories, and the characters. Especially the characters. They were an eclectic bunch, and they were as colorful as my daughter’s artwork. What I didn’t love was the fact that there were parts – whole chapters in fact – that could have been cut short, joined with the others, or entirely dispensed with simply because they added no real value to the grand scheme of things. Of course, the author wanted to gradually lay everything down on the table – every single detail – before all the action begins. To avoid confusion, perhaps? To ascertain that every detail she mentions in the last parts have been accounted for in the beginning? That’s understandable. But the effect of having taken too long to establish the framework of the novel is that all those details sort of became anti-climactic.

And then, there were the footnotes. Oh the footnotes. I have an utter dislike for them when they appear in fiction. My opinion is that, if something is important enough to include in the story, the author ought to have found a place for it in the narrative itself. Otherwise, why mention it at all? Primarily, footnotes tend to distract me from the narrative, and I hate distractions. With JS&MN, I encountered footnotes that spanned as long as four pages (!), and it didn’t help at all that the text was too small for my myopic eyes (I think I sustained permanent eye damage from the minuscule typeset). Wasn’t it an option to provide for an index for those sub-stories and/or factoids at the end of the book instead of cramming the narrative chock-full of footnotes? 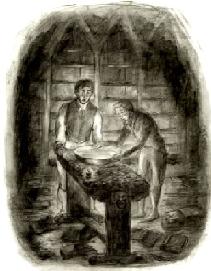 Superfluous chapters and sidetracking footnotes aside, however, JS&MN was still an entertaining and fun read. It reminded me of all the magic and fantasy books that I have previously read, though they may only be a handful. It was fun to visualize Faerie, the amazing feats of magic, even the brugh and Lost-hope. I loved the relationship and disparity between our gentlemen magicians, Strange and Norrell: their conflicts, how their strengths and weaknesses ultimately complimented each other’s, the definitive resolutions and the uncertain future. As for the minor characters, I also appreciated that out of the woodwork emerged some strong and memorable ones: Childermass, for one, and the gentleman with the thistle-down hair, for another – albeit for entirely different reasons.

My husband mentioned that this novel is included in a list of best fantasy books or something or other. Neil Gaiman has only high praises for the book. With whatever-that-list-is and with Gaiman, I concur.

And I did finish reading the novel in a month. Right on schedule.

Book Details: My own, trade paperback, a Christmas gift from Aaron (Thank You!)
Rating: ★★★★

Lynai said…
I agree on the unnecessary characters and the footnotes. Only that they were overshadowed by my awe at the magic and mystery surrounding the magicians and the fairies. Most especially the fairies. ;)
May 7, 2013 at 4:12 PM

Monique said…
LYNAI: I couldn't forget them because it was exhausting to read, hahaha! But it *was* a wonderful book. It made me miss reading fantasy! :D
May 9, 2013 at 9:50 AM