When I finished reading Drown last year, I felt a little sad. See, it was the last Junot Diaz book I will read until he publishes a new one, so reading the last pages and finally closing the book turning off my Kindle (who, incidentally, is named after a Junot Diaz character) felt like saying goodbye to a really good friend. And I’m not referring to Junot Diaz. 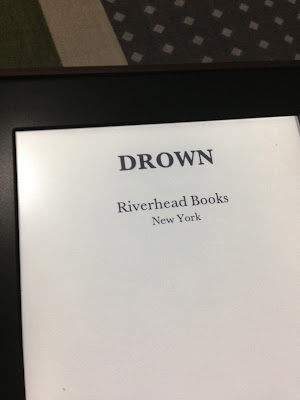 Drown is a collection of short stories principally featuring young immigrants from the Dominican Republic. The ten stories are alternately set in New York, New Jersey and – of course – the Dominican Republic, and told in the voices of Yunior, brash and bold Dominicano, and his contemporaries. They speak about the impoverished and unfortunate lives of people who, for me, are primarily (and reasonably so) in search of acceptance: in a new place they are forced to call their home, with the people they are bound to call family, among peers and strangers whose lives they are unalterably drawn to. The experiences of these narrators are captured in wry and fierce language, gripped with the emotions attributed to the words.

This isn’t the first time I’ve met Yunior – he was Oscar Wao's friend (and Oscar's sister's boyfriend) in The Brief Wondrous Life of Oscar Wao, and in This Is How You Lose Her he is more prominently featured as a cheating asshole, among other things. But notwithstanding his crass actions and brutal language, Yunior and I, we’ve bonded. His humanity seeped through the ruthless façade, and his vulnerability filtered through. Yunior and I, we’ve become friends.

And this is why I feel sad letting go. His story has come full circle, and it’s time to move on.

My favorite stories are those that are connected with each another, although they’re not arranged in successive order. In Ysrael, the adolescent narrator and his brother - Yunior and his older brother Rafa, who is also a recurring character in Junot Diaz's stories - are sent to the campo for the summer, where they cruelly taunt a boy whose face was mutilated by a pig and was waiting to undergo a reconstructive procedure. Later, in No Face, we are confronted with the story of the same boy, who is now telling his own tale. Then, in Arguantando, Yunior and his family wait to hear from their father, who has since moved to the US.

Just as in Oscar Wao and This Is How You Lose Her, I truly admire Junot Diaz’s writing prowess. There are people who may read it and not totally “get” it, but his writing is something exceptional.
Estoy enamorada de ti, Junot!

Kevin said…
I've been hounding Booksale outlets for a copy of Drown, as I'm amazed (as in The Brief, Wondrous Life of Oscar Wao) at how seamless Junot's language can be when inserting a lot of--for the lack of a better word--Latino speak. His language made me realize that Taglish can somehow work.
January 29, 2014 at 10:28 AM