If I were to rate the readability of Wolf Hall from a scale of 1 to 5, with 5 being the tear-your-hair-out, scratch-your-head-in-frustration kind of difficult, then I’d give it a 6. Flat out. 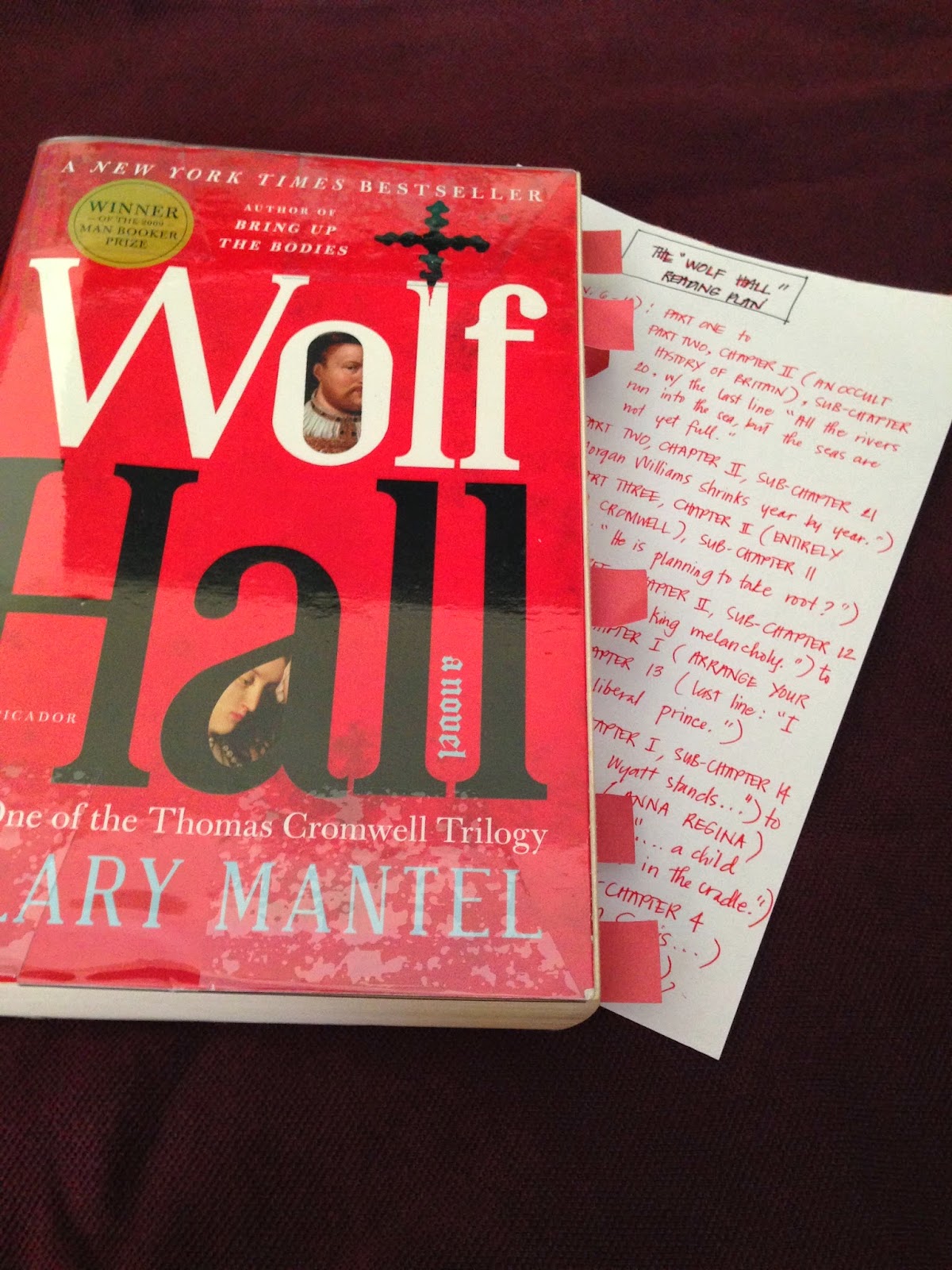 My first attempt to read this was in January 2013. I got as far as a handful of chapters before I got utterly exasperated with the writing style – mainly, with Mantel’s penchant for pronouns, causing difficulties in identifying the actual person being referred to. Half the time, I didn’t know who was speaking, when reading a conversation – imagine my headache when three or more characters are involved in a dialogue. So I set the book aside and thought, perhaps I wasn’t ready.

I set to read it again last December, but again, I wasn’t successful. I didn’t think I cracked it open anyway; there were just too many books demanding for my attention. So: second attempt, another failure.

But I really, really wanted to read it, having won the Man Booker in 2009 and because it’s historical fiction – the setting of the novel is 16th century Tudor England, and I have a certain fondness for historical fiction. I don’t know a lot about that era as much as the next person, and I didn’t think Tudor history expertise was indispensable anyway. So I took the chance of asking people from the book club if anyone would be interested in reading it with me (what we call over there as “buddy reading”), just so I would have a specific pace to follow and someone to share thoughts with, whenever I would hit a bump in my reading. Fortunately, some friends were up to the challenge, and so I finally got to finish reading Wolf Hall.

Anyone who knows the basics of Tudor History would be able to easily pick up the storyline of Wolf Hall. The characters are the same people who have created an intriguing English history during that era: Henry VIII, the king famous for his many wives and under whose reign the ties between Catholic England and Rome were severed; Henry’s first wife, Catherine of Aragon, who suffered terribly in the hands of her husband; Anne Boleyn, the most famous and ambitious concubine I have ever read about, and Thomas Cromwell, the lawyer primarily but quietly responsible for the Protestantism of England – and for many other things that were to shape England’s future.


So what about those who have no idea what Tudor history is about? Well, I would not totally dissuade them from reading this book, but I would warn them against utter confusion, unanswered questions (unless they Google the answers or look it up in history books), and generally, a difficult reading time.

It’s interesting, though, how Hilary Mantel had imaginatively filled in the small, probably insignificant details that the history books are unable to provide. The hushed conversations between king and subject, the harsh treatment of a supposedly respectable cardinal, the lingering looks that were possibly exchanged between king and concubine, the dull, daily goings-on in a 16th century London household. The history books are bereft of these mundane details, but Mantel has cleverly used fiction to fill in the blanks. An otherwise clueless reader would have to sift through the novel to weed out what is real and what is not.

Mantel also brilliantly but for some reason, curiously depicted important historical and religious persons as the opposite of what they are known to be. One important person who was shown in an entirely different light is St. Thomas More – he is a Catholic saint who refused to take an oath recognizing the king of England as the head of the Church and firmly stood by his Catholic belief that God is the head of the Church, despite torture and detention, up until his execution. In Wolf Hall, however, Thomas More was portrayed as an antagonist of Thomas Cromwell, who, on the other hand, was depicted as a reliable, quiet, and otherwise benevolent character – a rather inaccurate portrayal. Likewise, as the history books are devoid of information on Thomas Cromwell’s roots – little is known about his family or their origin – Mantel created a “history” for Cromwell which was tailored to fit his future demeanor and spur his motivations as a member of Henry’s court.

If you’re picking up this book because you want to learn more about Tudor history but you have no patience with non-fiction, trust me: don’t. Just go ahead and get a decent history book on the subject and read that instead – you can thank me later. There is really no added value to reading this book where written history is concerned. But if you (1) wish to confound yourself with less-than-desirable writing, (2) are curious enough, or (3) are intrigued by fiction interspersed with fact, then by all means read Wolf Hall. While the novel definitely gets better towards the end (curiously enough, it was more focused on Thomas More rather than Henry or Anne Boleyn), it will take you more than 500 pages to get there, and you had better have lots of patience and time to wade through the words.

It was loud with his treason; it was quibbling as far as quibbles would serve him, it was demurs and cavils, suave ambiguities. It was fear of plain words, or the assertion that plain words pervert themselves; More's dictionary, against our dictionary. You can have a silence full of words. A lute retains, in its bowl, the notes it has played. The viol, in its strings, holds a concord. A shriveled petal can hold its scent, a prayer can rattle with curses; an empty house, when the owners have gone out, can still be loud with ghosts.

Anonymous said…
Me not giving it the same attention as the other books is unfair. But to be fair, I was in a slump last January. Let's see if my reading gets better with my second attempt. After all, you had three. I'll keep attempting like you. ;)
April 3, 2014 at 11:50 PM

Astrid (Mrs.B) said…
I've also attempted to read this a few times and failed.
However, my book club might be reading Bringing Up the Bodies soon. Since they are stand alone books, we decided to go with the second one since it's shorter and an easier read than Wolf Hall. How was the turn out at your book club meeting?
April 6, 2014 at 10:51 AM

ASTRID: Oh, we didn't have a discussion on this at the book club. It was just four of us who read it together. I don't think our book club would have liked to read this, and I wouldn't recommend it. :)