It is rare for me to get emotionally involved with the books that I’ve read – I don’t know if anyone else feels this way about the books that they’ve read. I’m sure there are readers who share this feeling, and for those who haven’t experienced it yet, just wait. It’ll leave you aching, wanting – not unlike a hangover, but a good one. 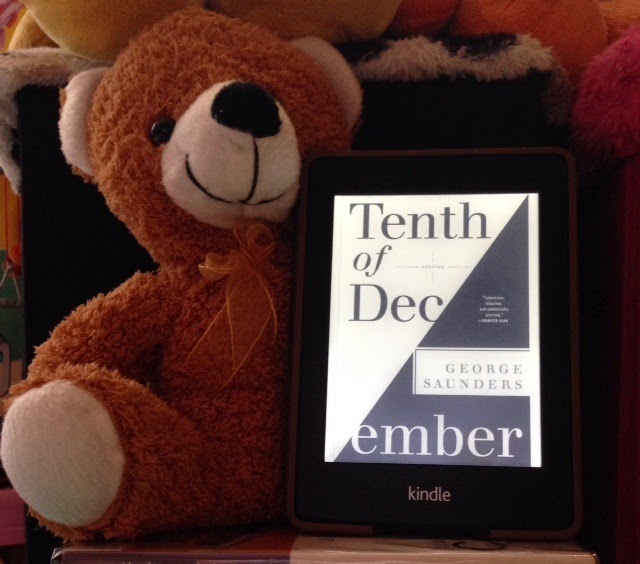 That’s how it was for me when I finished reading George Saunders’s Tenth of December, which I read along (“buddy read”) with a couple of friends from the book club. We all gave perfect five-star ratings for the book, by the way. And by the looks of it, we never read a story we didn’t particularly like.

Tenth of December is a collection of ten short stories tackling various subjects, all excellently written: Victory Lap, Sticks, Puppy, Escape From Spiderhead, Exhortation, Al Roosten, The Semplica Girl Diaries, Home, My Chivalric Fiasco, and of course, Tenth of December. Just now, typing the titles of each of the stories reminds me of the emotions that they separately evoked in me as I devoured every one of them.


It’s quite difficult to pick a favorite from the lot: Victory Lap was a persuasively engaging opening salvo, which continued on to Sticks, which caused a bit of a havoc in my little heart. I’ve read Puppy in a separate short story collection, but it didn’t quite have the same effect when I read it the second time around. Escape From Spiderhead was a wonderful surprise, with its sci-fi element + humanity aspect. Exhortation threatened to bore me, but it pulled through, in the end, just as Al Roosten did. The Semplica Girl Diaries – now this one hit me hard. It had a sci-fi element as well, but it didn’t negate the humanness and sensitiveness of the story – in fact, it even magnified it. Home left me puzzling over the little details in the story but it was a lovely one just the same. My Chivalric Fiasco had the same sci-fi element combined with human emotions. Finally, Tenth of December took my heart, squeezed it, and then nurtured it after.

[I think I’ll go ahead and pick The Semplica Girl Diaries and Tenth of December as my favorites, anyway.]

This is my first time to read any book by Saunders, but I’m already a fan. It was wonderful how he was able to take life and humanity, marry them into sci-fi elements, and produce these stories that resonate with the reader long after the last page has been read. Each story was distinctly told, each voice was unique, each tale brimming with compassion and humor and sadness and hope.

Because, okay, the thing was--he saw it now, was starting to see it--if some guy, at the end, fell apart, and said or did bad things, or had to be helped, helped to quite a considerable extent? So what? What of it? Why should he not do or say weird things or look strange or disgusting? Why should the shit not run down his legs? Why should those he loved not lift and bend and feed and wipe him, when he would gladly do the same for them? He'd been afraid to be lessened by the lifting and bending and feeding and wiping, and was still afraid of that, and yet, at the same time, now saw that there could still be many--many drops of goodness, is how it came to him--many drops of happy--of good fellowship--ahead, and those drops of fellowship were not--had never been--his to withheld.

Anonymous said…
We have the same favorites! My third would be Victory Lap because I like the shifting points of view. And that look that our "hero" had, that look that his life was over (something like that). Gaaahhh! It wrenched my heart. And that's only the first story.

Monique said…
BUDDY: Me, too! Loved Victory Lap. It "won" me over from the get-go. Are we reading Pastoralia together, too? :D

Tin said…
Ooooh! Favorites! Hehe. Mine are Semplica Girl Diaries, Victory Lap and Escape from Spiderhead. I really like how despite the grim situations the characters are in, there is a certain lightness and warmth to his stories. :)
June 3, 2014 at 4:09 PM