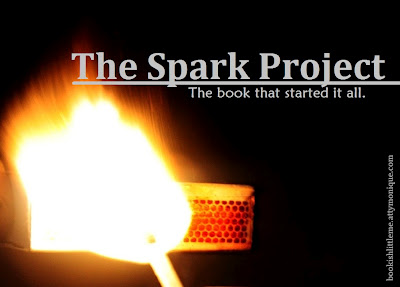 The Spark Project is a semi-regular blog feature where a reader and/or book blogger is invited to talk about that one book that sparked his/her interest in books and reading. He/She will tell us about the what-when-where-why-and-how of this topic, how his/her reading habits have evolved since encountering that book, and so on. Wouldn't it be fun and interesting as well to know how a fellow book lover discovered the wonderful world of books? :)

Featured today on The Spark Project: TIN of Rabbitin
People from The Filipino Group (TFG) over at Goodreads (well, at least those who are currently active) have known her and felt her online presence for a while now, but no one has yet had the pleasure of personally meeting Tin. She resides outside of Metro Manila, so she finds it difficult to attend book discussions and other events, which usually happen within the metro. Still, her fun and friendly personality can be felt online, as she actively participates in group discussions. She also regularly tumbles down into her rabbit hole, er, updates her book blog, Rabbitin, where you can "discover a whole new world through the pages of books."


(1) What is the one book that sparked or kindled your love for reading? Describe the circumstances in which you found or discovered it.

I wish I was like Matilda, the smart and precocious protagonist created by Roald Dahl, who at the age of four has read Bronte, Hemingway, Faulkner, Austen, Steinbeck, Dickens and a whole slew of other big literary names. At the age of four, or perhaps a little older than that, what I could tell you about were: The Mighty Morphin Power Rangers, The Uncanny X-Men, The Teenage Mutant Ninja Turtles, Bugs and Daffy, and Tom and Jerry, Shaider and Bioman, and Disney Princesses. I wasn’t entirely devoid of reading experiences. I did read a couple of Ladybird books and a ton of Archie Comics, which I very much remember with fondness. But I mostly spent my free time zombified by the thing called television.

So the reading habit was not something that came naturally to me. My earliest memory would have to be around the time when I was about 11, I think. That was when a peddler of this big book of fairy tales came to our doorstep. She was a lady, who was quite pretty, I remember. My mom sat opposite her, held one of her wares, something entitled: A Treasury of Fairy tales. It had this glossy and padded cover, with illustrations I found to be quite mesmerizing. I was at an age then, when I knew well enough that showing eagerness in front of a salesman won’t be to your advantage, so I slunk and rubbed around my mom like a cat, willing her to get it for me. I would have purred right then and there. But it turns out, I did not need to debase myself further, as she already handed the lady some payment. And soon it became a ritual for me and my eldest sister to read one story from that book, aloud, every other night. I always look forward to those nights.

Apart from that there are two other reading milestones that come to mind. The first one concerns my absolute favorite book. It's a book series actually. J.K. Rowling’s Harry Potter Series. Okay, so it was our school’s Intramurals. And since I am terrible in all things sports, every year I would always be one of the game officiants. And during that particular Intramurals, I was assigned chess. I thought, what luck! I did not have to be out in the hot sun. Officiating the first two of games was okay. But the third and the umpteenth ones, felt like I was watching paint dry. Anyway, when the last game ended, I shuffled out of the library (where the games were held) like a prisoner seeing light for the first time. I tried to look for anyone to hang out with, but they were all outside being sportsy and what not. So I went to the classroom, sat at my desk, and then saw a copy of Harry Potter and the Sorcerer’s Stone on another’s. I thought, well, why not? I ended up reading about a third of it. And resolved to borrow it from my friend, and the rest, as they say, is history. 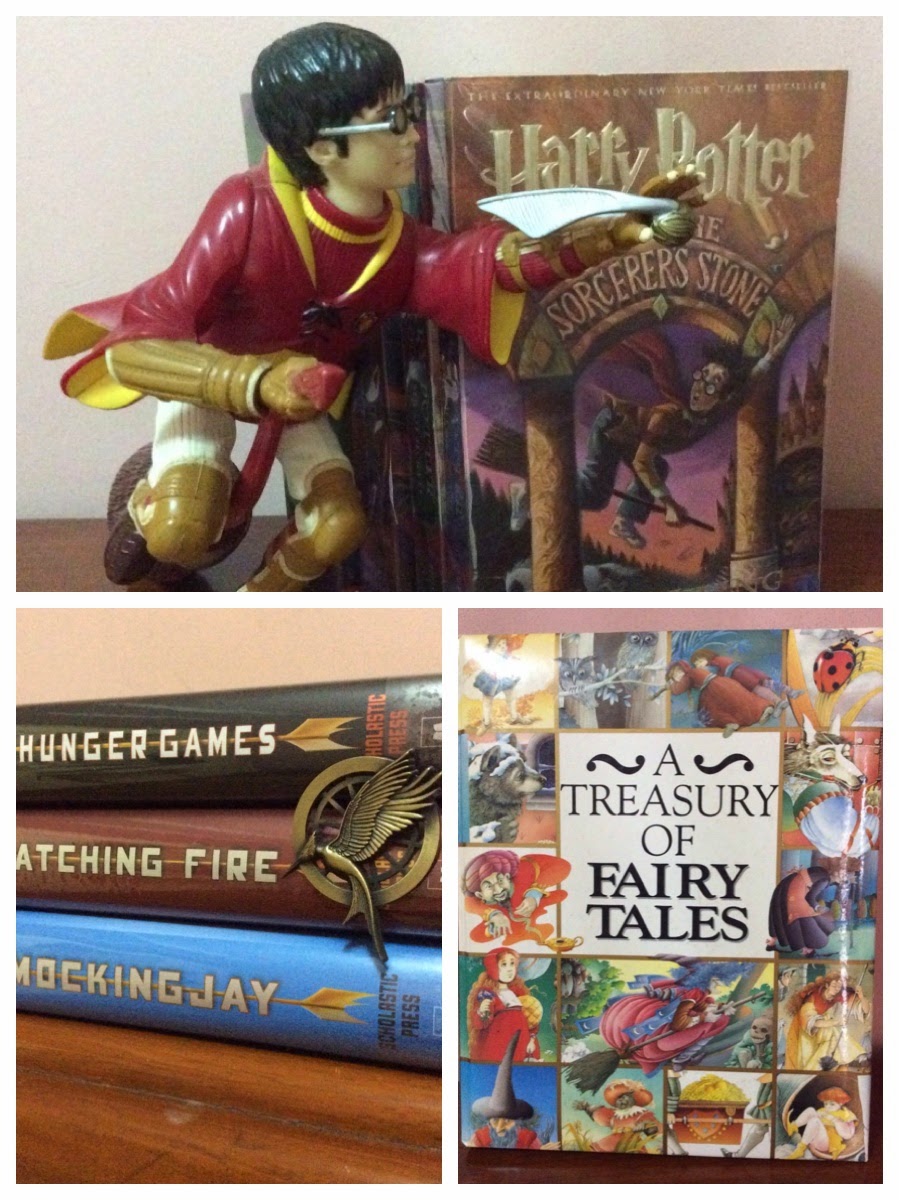 But after Harry, my fervor for reading fizzled. Sure, I read here and there but nothing ever really sparked my excitement. This marks the second milestone, being the time when a friend gifted me with Suzanne Collins’ The Hunger Games. And then….boom! I was back in business. And I thought, I wasn't this eager about reading since Harry Potter, and I wanted more of that feeling. So I went on to discover book blogs, from which I gathered other great titles to scout for and read. And then my own book blog happened…and my mad descent into TFG happened…and the rest, as they say, is history.

(2) How has it affected you, both your life as a reader and life in general?

The fairytale collection book is one of the reasons why up to this day, I enjoy retellings of old tales and fables. And could probably explain why I gravitate towards fantasy, more than any other genre. Hence my love for the Harry Potter books.

Harry Potter (and The Hunger Games), aside from indulging my need for awesome escapism, I think it was the characters that left a mark on my impressionable young mind at that time. Characters that aren't as clear cut as those in the fairy tale-like tales, I was used to reading. Take for example Hermione Granger. I mean look at this girl. She is this super smart, but quite an a-type and insufferable know-it-all, and not entirely popular with her peers. Now, as far as I know, in fairy tales and other stories, this kind of girl would be nothing but. That is all she would be, the resident encyclopedia/geek. But Hermione goes beyond being a stock character. She is a nerd yes, but brave and loyal, who allows herself to be in life-threatening and uncomfortable situations for her friends. But if she was wired the way nerdy characters usually are, she would encourage the gang to stay put and consult with authorities. Plus, she is not entirely a noob around guys and about relationships, another trait unusual in nerdy types. There is this particular scene where she berated Harry and Ron, for sort of, judging Cho Chang. Explaining to them why the latter acts the way she does. Ultimately telling Ron off for having the emotional range of a teaspoon. And despite being the smart one, she isn't entirely good at every wizarding subject. She is not particularly good at Potions, and sucks at Divination. And she is clearly not as skilled in dueling as Harry is. In short, Vote for Hermione. XD Next time nalang ang aking “Katniss for President” speech. (But we all know Katniss would not really make for a good president because…okay, stop na.)

All I am saying is that books like these, made me realize that no one can ever be just one thing. We are complex and aren't in any way limited to only a certain type. With that said, we can never truly know a person. Never. Thus, I always keep an open mind about everything, or at least I try. This is what I truly enjoy about reading books, I get to widen my perspective. I get to see the world in so many different ways. From a mother's eyes, or from a father's, a wizard's, a swordsman's, a beggar's...It really doesn't matter what type of character, but they all impart something on me. Some basic truth. It is just intoxicating and wonderful. Every single book I read, makes me a different person each time, a better one. Or at least I hope, a better one.

Thank you for this chance to feature you on the Project, Tin! (Personally, I never thought of Hermione that way. Now, I see her in a whole new light. Vote for Hermione, indeed!) Friends, won't you tumble down into the Rabbitin hole for more fun? You can check out her favorite books here. :)

Here's to hoping we could all meet you soon, Tin! :)

Do you wish to tell everyone about the book/s that kindled your love for reading? Send me an email at moniquedemata [at] yahoo [dot] com, and let's talk. :)

Anonymous said…
Monique, good job for featuring our beloved rabbit! I also remember a kiddie illustrated encyclopedia I always read when I was a kid, also bought from those door-to-door salesmen. I really really love Hermione too! By the way, do you want a photo of a not so shy Rabbitin? Haha!

Anonymous said…
This comment has been removed by a blog administrator.
September 12, 2014 at 1:20 PM

Monique said…
MELIZA: Nope, I think I'd like to see Tin in person, not another photo. :)

Monique: Thank you for picking me as tribute! I always enjoy our online interactions. The Gaiman and Saunders fangirling...at baka madagdagan na ni David Mitchell. :)

Angus: Hahaha! Tama, if anything is an indication of classiness it's Dane DeHaan fangirling. :D
September 12, 2014 at 5:22 PM

Anonymous said…
Nyahaha, bugaw. We still have it at home, in Batangas. I think it's published by Macmillan.
September 12, 2014 at 6:51 PM