Fear of Flying was our book club's book for the month of August. It was my first time to hear about both the author and the book, so I really had no expectations whatsoever when I started reading it. Well, perhaps some sex – graphic, suggestive, hardcore, tender, two-way, three-way, sideways, all kinds and positions – considering that when we voted for the book some months prior, the original theme was erotica. So more or less I expected to read about sex, in varying levels of intensity and explicitness. 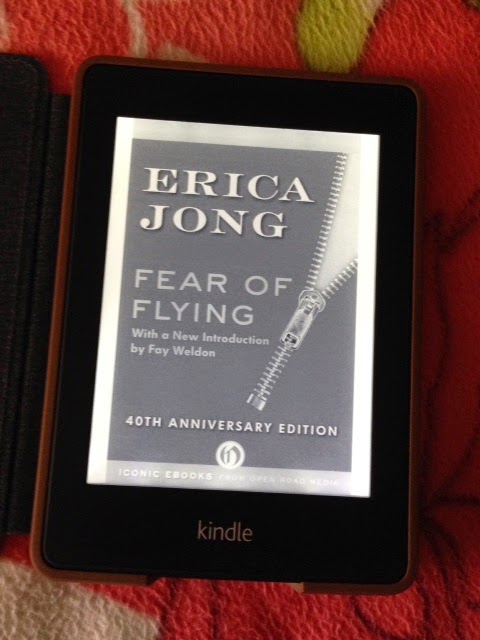 There was sex, yes, but the telling of it felt a tad too forced for me. To be clear about it, Fear of Flying isn’t really erotica, if one examined the genre closely. Instead, it read more like a memoir, although the author published it nearly 40 years ago as fiction. Fiction that practically mirrored her own life, it was difficult to deny the similarities, that is.

Fear of Flying is about Isadora Wing and her so-called journey to self-discovery, particularly, her sexuality, particularly, her quest to find the zipless fuck. The what? Uh, yeah. The Zipless Fuck. (Did she find it? Read the book. Or not.) She’s been zipping from one relationship to another, is currently with Husband #2, with various fantasies and flings in between, and she embarks on a journey from one European city to another to finally find and “liberate” herself from anything and anyone else. Sounds good for a novel that supposedly champions feminism back in the 70s? Perhaps, but surprise, it’s 2014.


I didn’t like Isadora. She totally annoyed me. She doesn’t know what she wants, she is all over the place with her pretentious sexcapades and inanities. Oh, but that’s the entire premise of self-discovery, you might say. Someone must first be "lost" before he or she could be found. To that I would concede, but if that someone is like Isadora who comes from a well-off family, has had good education, and apparently had the choice of men to fuck, then what right has this person to become “lost”? What right has this person to feel confused as would warrant self-discovery? If a person who has Isadora’s stature in life feels lost, can you imagine the destitution and hopelessness that someone who has less in life than her would feel? Seriously?

I could go on and on about the many things that irked me about this novel, but I’d rather not. Suffice to say that if I had a friend like Isadora in real life, I’d have given her a whack on the head to knock some sense into her.

Oh Isadora, you little spoiled brat. You infuriate me, but perhaps I should have just let you amuse me.

But let’s get to the things that I did like about the novel, which are the funny parts. My favorite one would have to be The History of the World Through Toilets, which is how I discovered that German toilets look weird and that the French have odd toilet habits, too. (Yes, I Googled!) Also, Isadora had this boyfriend – a conductor – who left skid marks (!) on the sheets because holy shit, he doesn’t know how to properly wipe his own ass. Gross, I know, but funny, when I think about it. Her first husband was also a whacko, figuratively and medically, and while that was no laughing matter, I enjoyed how their story was told.

One facet of Isadora’s story I genuinely liked was her relationship with her mother, Jude. At least, the positive side of it. Her mother was her greatest fan, and I loved reading about how much her mother doted on her when she was younger. I loved it because it hit close to home, and it is regrettable that things had to change between them later on.

I also liked knowing that I am nothing like Isadora. Although I do wish I had lots of money to spend, yeah.

Don’t even get me started with the writing. Even the use of crude words like fuck and cunt felt awkward and forced to me. It felt like Erica Jong tossed in those words just for the heck of it, and the effort fell flat.

A friend advised me, before I started reading this, to NOT root for Isadora and to detach myself from her, if I wanted to at least enjoy the book. I was off to a good start, but then Isadora meets Adrian, who slaps her butt in the presence of her husband, Bennett. Instead of getting offended, feeling indignant or even repulsed by it, as normal, married women are wont to, Isadora even checks out the guy. Hello? And it was all downhill from there. Never mind that she discovered her self and sexuality in the end.