Speak is one of my “dare books”* at the book club in January of last year – it was one of my good friend’s worst least favorite books for the year and I (un)fortunately drew it as one of the books I was supposed to finish reading within the year. But even before I got dared to read it, I already have a copy of the book, having bought it for a discounted price at a local bookstore some months before. For whatever reason, though, I couldn’t muster the inspiration to read it. Until the dare happened. 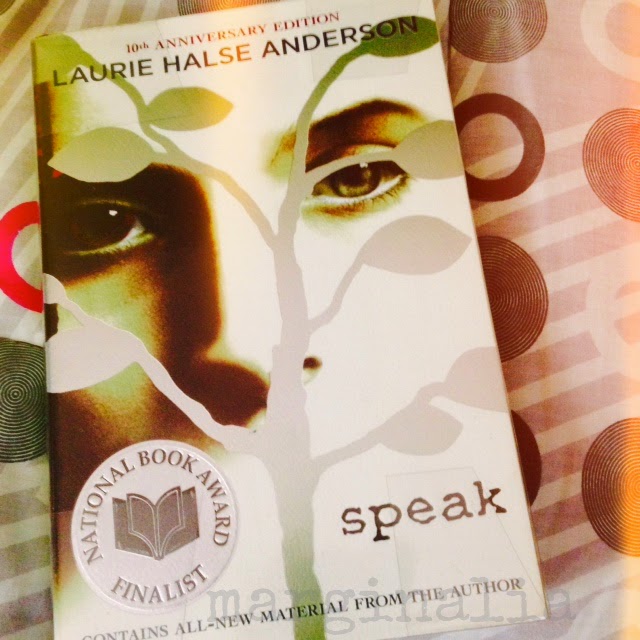 Before she could even begin her freshman year in high school, Melinda Sordino had already ostracized herself: she busted an end-of-summer party to which she and her best friend were invited by calling in the cops. As a result, people shot her dagger looks wherever she passed them in the halls, and she doesn’t parry them; instead, she maintains her silence. She ignores the negative talk and withdraws deep inside herself, where she keeps secret something that she could never, ever have the courage to disclose to anyone – the reason why she called the police on that fateful summer party.

When I first asked some friends about Speak, they mentioned that it was a highly spoilery book. If you didn’t know it yet, I hate spoilers. They diminish my reading pleasure because I already know, in the back of my mind, the reason behind things, the moving force behind the characters’ actions (or omissions). Years would pass before I would read the book, though, and sometime during the interim, I discovered – inadvertently – the major, major spoiler about Speak. In hindsight, perhaps that was why I put off reading it for the longest time. (Also, someone told me it was adapted into a movie [?] and the lead character was portrayed by Kristen Stewart. Haha.)

Speak was very easy to read. It was told in the first-person point of view, constructed as Melinda’s thoughts and feelings, but the narrative was somehow limiting in perspective because even she refused to think about or acknowledge that something – the reason for her calling the cops and busting the party. The narrative shifted between the present and that summer, through Melinda’s flashbacks and reminiscences. Eventually, as she must, she reveals the something – and the someone – and it is only then that her silence and her actuations were finally revealed.

I liked Speak because it deals with relevant issues, especially with today’s youth. The ways to deal with a situation like that of Melinda’s vary, depending on the constitution and character of the person concerned, but in every case, support and help must be given. It is especially difficult if any one person is like Melinda, who preferred to keep silent and refused to speak out. Not all persons are made of strong stuff, and for the Melindas of the world, we must give them our strength to help them deal. No one should judge; instead, we should listen.

However, because I already know what that something in Melinda's case was, there were times when I could not help but feel frustrated – at Melinda, at the people surrounding her, at her situation. Personally, there is only so much you can do to mull, or grieve, or feel depressed over a problem, but there will come a point when you just need to wise up and do something about it. Seek help, tell someone, anything except suffer in silence. Speak. And it was during those times when I mentally shook Melinda – to drill some sense into her, to give her the courage that she needed to do whatever she needed to do. After all, no one can extend help if she could not begin to help herself.

In sum, Speak is relevant for and more appropriately read by the youth. The older generation, especially those who have teenage children, could also benefit from the issues tackled in this book. It will open eyes and minds, and teach a thing or two about listening, coping, and acceptance – whatever the situation, but especially in the one Melinda had to go through.

Lynai said…
Ah, the spoilers indeed will ruin this book for you. Maybe if I re-read it this time, after knowing what happened to Melinda that summer, I might also be frustrated at her inability to be brave and speak out for herself.