The Narrow Road to the Deep North

Perhaps I should disclose at the outset that over the years that I’ve been reading, I’ve developed this little inner button that goes on whenever I’m about to read an award-winner. It makes me predisposed to like a book because it wouldn’t have received accolades if it were no good, yes?

That’s what happened when I got myself a copy of the 2014 Man Booker prize winner, The Narrow Road to the Deep North by Richard Flanagan. That little button blinked like mad, and with good reason – Flanagan (and all the other shortlisted titles) trumped my bet for the Booker, David Mitchell’s latest novel, The Bone Clocks. So I knew, at the back of my mind, that I would be in for a real treat. Should be.

The Narrow Road to the Deep North did not disappoint. 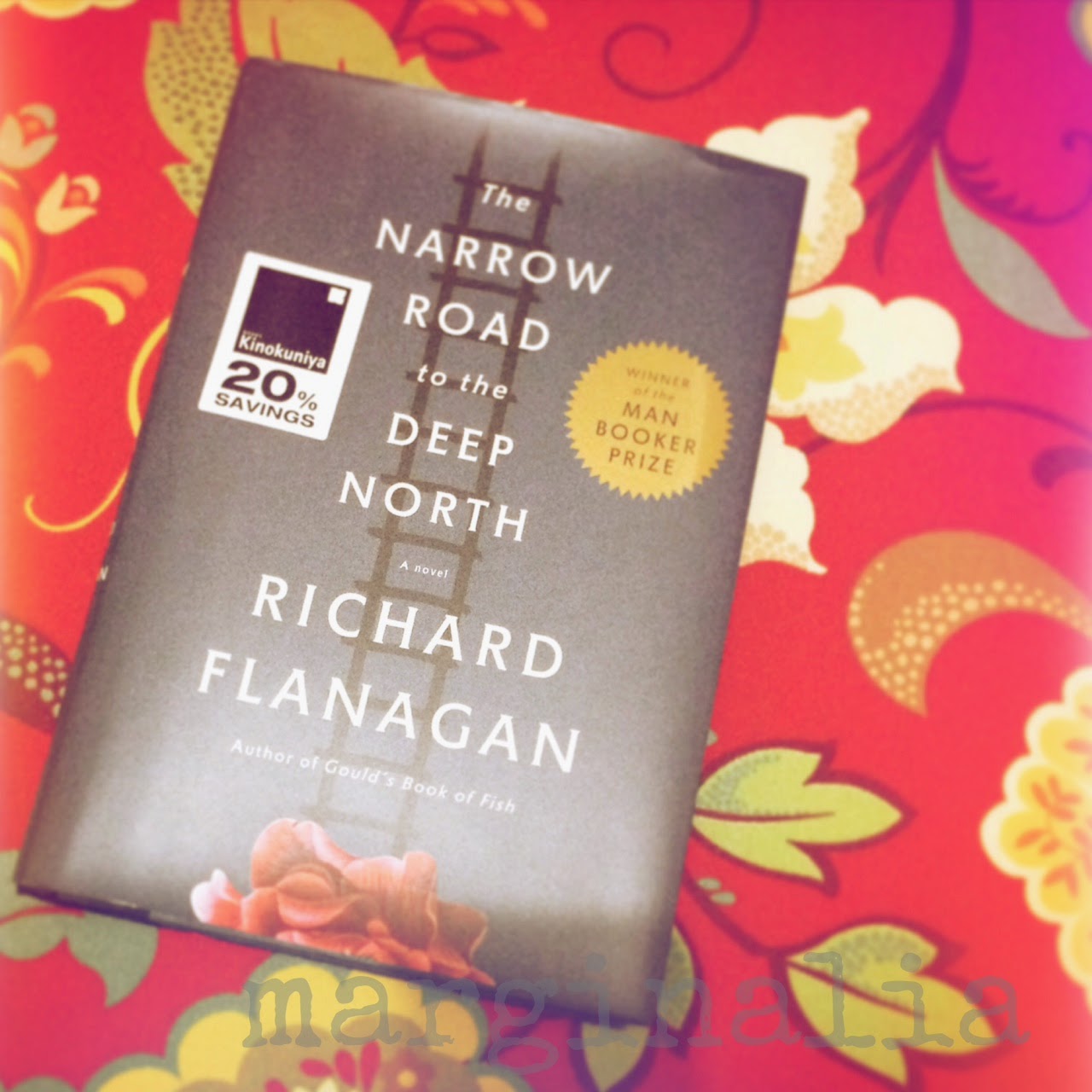 The book is both a war memorial and a love story, but I’m inclined to say that it’s more of the former. As Australian surgeon Dorrigo Evans, now a famed war veteran, writes the foreword for a book about the atrocities that transpired at what is now known as the Death Railway (also, "Burma Railway," "Burma-Siam Railway," "Thailand-Burma Railway") during the Second World War, he recalls his own painful experiences as the commanding officer of a battalion of Australian prisoners of war (POWs) who labored in “the Line” under the Japanese Imperial command. His memories narrate for us the struggles they endured in the Siam-Burmese jungle where the railroad was to be constructed, how his men succumbed to various diseases that ate at their bodies and minds, and how the Japanese officers accepted no excuses that would exempt dying men from labor, among many others.

Dorrigo’s illicit affair with his uncle’s wife, Amy, provided the springboard for the months that led up to Dorrigo’s deployment for the war. It was a short but intense affair that did not provide closure for both parties. Having survived the war, Dorrigo would then be expected not only to tell the tales of his fallen comrades, but also to find his way back to Amy, to that woman who he first met at a bookshop.

The charm of The Narrow Road to the Deep North for me is in its inspiration: Flanagan’s own father was a POW survivor of the Death Railway, which traverses the jungles of Siam (now Thailand) and was intended to connect Siam to Burma, two territories then under the control of the Japanese. History is replete with accounts of POW survivors from that period, and Flanagan would not have run out of material to use. But because his own father endured “the Line” – the Death Railway as referred to in the novel – I felt that Flanagan wrote something that was very personal to him, and it lent more credence to the narrative.

Perhaps that is also the reason why the novel has such well fleshed-out, multi-dimensional, and quite unforgettable characters, I both sympathized and detested some of them at the same time. Dorrigo’s crew – Darky Gardiner, Jimmy Bigelow, Sheephead Morton, and Jack Rainbow, to name a few – had their own stories to tell, diseases to fight off, and lives to go back home to that it was difficult not to pity them at any one point, but they were also just human and prone to mistakes. Their sufferings and attempts to deal with it illustrate the indomitable human spirit and how far one would go for survival. Darky Gardiner was the one particular POW whose life and fate have remained with me until now. The Japanese officers who commanded them – Major Nakamura and Colonel Kota – together with the Korean guard, who the POWs nicknamed the Goanna, were portrayed as evil, heartless men. But they, too, had their own stories and motivations for living and doing what they did. Honor, identity, love of country. Perhaps it would be reaching for me to attempt to explain how their lives equally had meaning as those of their prisoners, so I will stop at that. What I will say, though, is that one can never truly comprehend the depths and intricacies of human spirit and behavior.

Historical fiction has always been one of my favorite things to read because it allows me to discover parts of written history that I never would have discovered on my own. The Narrow Road to the Deep North is one such work of historical fiction from which I learned so much: the construction of the Death Railway that claimed the lives of thousands of POWs, under the command of the Japanese Emperor, who would stop at nothing and at no cost to have the Railway completed. It was one part of the Second World War that I had absolutely zero knowledge of, and to say that I was shocked at the camp conditions and miseries that prevailed at the time would be an understatement.


The novel did not stop at the construction of “the Line,” however. Instead, it continued on to the conclusion of the war and explored its aftermath, particularly the lives of those who survived. The narrative followed the individual fates of the remaining POWs as they were shipped back to Australia, back into the lives they thought they had left behind and had hopes of reclaiming. We also read about the fates that befell the Japanese officers, Nakamura and Kota, as well as the Goanna, as they returned to Japan and faced prosecution for their (alleged) war crimes. As I read through this part, Machiavelli was pounding in my head, intertwining with sympathy and understanding. Humans and their mistakes.

The crux of the novel, as alluded to earlier, is really the war, so perhaps I could be relieved from exploring the affair Dorrigo had with Amy, his uncle’s wife, except to say that it felt a little trivial in the grand scheme of things. Yes, it was lovely and illicit and passionate; perhaps it allows us a glimpse of Dorrigo’s life before and after the war and attempts to justify his womanizing ways more years later. After all, Dorrigo ought to begin and end somewhere.

The Narrow Road to the Deep North is intense, profound, and relevant. I was predisposed to like it because of my little inner button that lights up at the sight of award-winners, and I wasn’t disappointed.

"Humans are only one of many things, and all these things long to live, and the highest form of living is freedom: a man to be a man, a cloud to be a cloud, bamboo to be bamboo."

Anonymous said…
Flanagan's father occasionally asked him if his manuscript is already finished. When he finally replied yes, his father died a few days later. Oh dear. If that is not enough to get anyone sold, I don't know what else to do.
January 30, 2015 at 2:23 AM