Suspended Sentences is a collection of Nobel laureate Patrick Modiano’s three novellas: Afterimage, Suspended Sentences, and Flowers of Ruin, all translated from the French by Mark Polizzotti. Afterimage is about a young man who follows a photographer around Paris and catalogs his photographs; Suspended Sentences tells the story of a young boy and his brother and the people they were entrusted to after their parents left to work for the circus, and; Flowers of Ruin is also the story of a boy who remembers a part of his childhood, his father, and a murder mystery that transpired at the time. 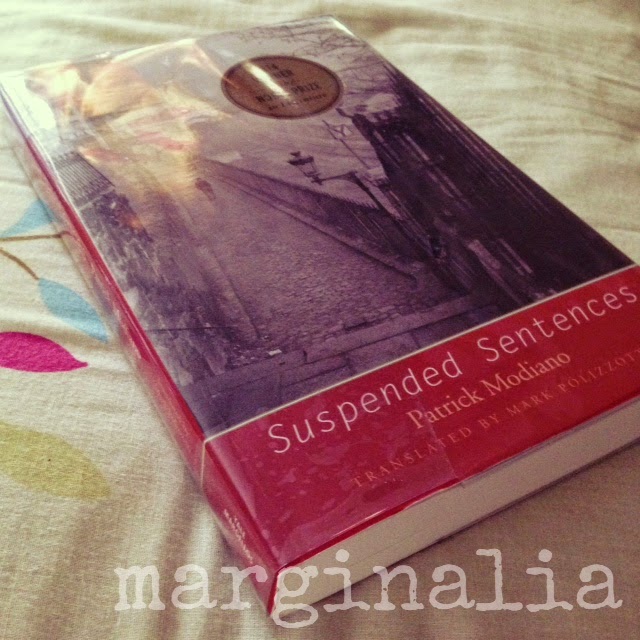 Of the three novellas, I liked Afterimage and Suspended Sentences; the last one was a chore to read.

All three novellas explored very hazy plots and vague characters. It appears to be a common theme in the three stories. At first, the nebulousness of the characters was intriguing, but by the third story, I felt like I was at the end of my wits.

The book started out strong with Afterimage, which I would consider as my favorite novella from the lot. Francis Jansen, a photographer, takes a photo of the unnamed narrator and his girlfriend, Colette, whom he approaches in a café somewhere in Paris. They strike up a conversation, ending up with the narrator taking up the job of cataloging Jansen’s photographs, which were in a heap in his apartment. Thereafter, certain coincidences – as the narrator himself calls them – come to the fore: Jansen became involved with a woman named Colette, our narrator’s girlfriend’s namesake, and later, he realizes that his name is Francis Jansen.

Now that took me by surprise, and I didn’t know what to make of it. Was the narrator talking about himself from years back, when he was younger? Was he merely confused? These and other questions would have been fodder for an interesting discussion, which I would strongly advise to future readers.

Certain coincidences risk passing unnoticed; certain people have appeared in our lives on several occasions without our realizing it.


The hazy theme continues on to the titular novella, Suspended Sentences, which involved more shady characters and clear recollections of them, recalled and told by a young boy named Patrick. It was at the first mention of the narrator’s name that it occurred to me, is this autobiographical? All the while I had been under the impression that the stories were purely fiction. A quick inspection of the blurb reveals: “Modiano draws on his own experiences, blended with the real or invented stories of others, to present a dreamlike autobiography that is also the biography of a place.” That explains, too, the travelogue-ish feel of the stories.

Unlike the first two stories, Flowers of Ruin was tedious and rambling to the point of being pointless. There were more descriptions and commentaries of places and nooks in Paris than I would care to read about, and it took away my already-diminishing interest in the mystery of the death of a young couple described in the first chapter. As I write this, in fact, I could barely remember the details of the plot. I think I breezed through the story just so I would be able to finish it already.

In sum, Suspended Sentences read pleasantly enough, all things considered. I appreciated the first two stories enough to disregard the tediousness of the last. It was interesting to read about the Paris that existed in the 1940s, through the eyes of a very young man whose experiences with almost-strangers left an indelible imprint on his mind. Invented or not, the characters he spoke of left their own lasting impressions. The nostalgic air prevalent in the stories never once waned, and Modiano’s description of Paris from decades back was nearly haunting. Suspended Sentences is a testament to the past, and memories, and of a Paris as captured in the writer’s mind.

Why bother chasing ghosts and trying to solve insoluble mysteries, when life was there, in all its simplicity, beneath the sun?