Perdido Street Station, the first book in the Bas-Lag series, is my second China Mieville. I started reading this last month and progressed easily because the plot intrigued me, but then I had to put it aside in the meantime to give way to book club duties. But now that I have more time to spare, I finally managed to finish reading it, and I am blown away. 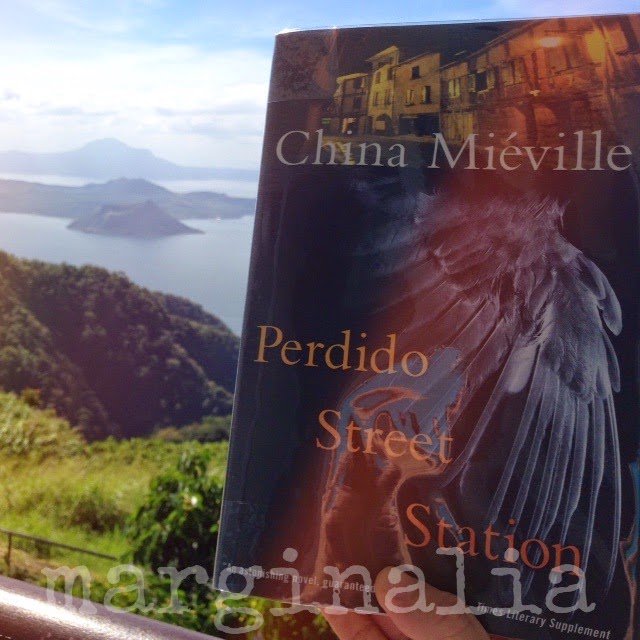 Isaac Dan der Grimnebulin is a renegade scientist who lives in New Crobuzon, city of concrete, filth, connecting train stations, and Xenian creatures. Yagharek, a garuda (or a half-bird, half-man creature) from faraway Cymek, bereft of his wings as penalty for a crime he committed in his own country, approaches Isaac with the following proposition: Isaac should make him fly again in exchange for gold. Isaac accepts, and as he embarks on his research and experiments to help Yagharek, he unwittingly unleashes a powerful, predatory force that compels him to rearrange his priorities and takes him and his companions to a world full of danger, betrayal, death, and loss.

Perdido Street Station was one awesome adventure after another, and it was amazing to delve into an entirely new world that is a product of Mieville’s rich imagination: New Crobuzon, its citizens (humans, khepri, vodyanoi, cactacae, the Remade, among others), their way of life, the government, and especially, the language. Among my favorites are “thaumaturgy” and “chymical”; I like how they roll off my tongue. Some parts were admittedly graphic to the point of being gruesome, but they were necessary in order to accurately describe the gravity of the current situation.

The principal characters were convincing enough that I sympathized with them and even felt indignant at certain points in the novel. However, I felt that there were superfluous characters that contributed nothing to the development of the plot. Case in point: Benjamin Flex. He represented the political aspect of the book, which at first was promising. Unfortunately, that angle went kaput. Another: Lin, whose role, I realize now, was merely to emphasize the moral dilemma that faced Isaac in the end. She was also romantically involved with Isaac, which was all right until you realize what kind of creature she actually was. Let's move on.

I had my little tiffs with the narrative, too. For one, Mieville tended to over-describe places, which I found laborious and unnecessary. For another, the main story arc – Yagharek’s flight problem – terribly deviated into a secondary, albeit seemingly more interesting, story arc which took up approximately a good ¾ of the book. When that story arc ended and the narrative reverted to Yagharek’s original situation, we are confronted not with a solution but a moral dilemma. I am still recovering and trying to make peace with that one.

Still, I had fun reading Perdido Street Station. Yes, the ending wasn't the one I was expecting, but it was a good ending nonetheless, and I'll take it. China Mieville’s talent is now beyond reproach for me, especially his knack for creating worlds that perhaps no one else would ever dream of.

“One day I realized that I no longer dreamed of what I would do when I was whole again. My will burned to reach that point, and then suddenly was nothing. I had become nothing more than my desire to fly. I had adjusted, somehow. I had evolved in that unfamiliar region, plodding my stolid way to where the scientists and Remakers of the world congregated. The means had become the end. If I regained my wings, I would become someone new, without the desire that defined me. I saw in that spring damp as I walked endlessly north that I was not looking for fulfilment but for dissolution. I would pass my body on to a newborn, and rest.”

Anonymous said…
However, I felt that there were superfluous characters that contributed nothing to the development of the plot.

I agree with this. For example, the handlingers, they're interesting characters but I think the story will survive without them.

Monique said…
MELIZA: I think so too! Although it was fun imagining how the handlingers did all those zipping and zapping in the air, fighting off the slake moths. :))
March 12, 2015 at 9:53 AM

Tin said…
Haha! Perdido is like a stew, andaming sahog. And China Mieville likes to zig and then zag and then zig again.