Dept. of Speculation is a fragmented depiction of a marriage in all its stages and aspects: first meeting, courtship, wedding, domesticities, conception and child rearing, the inevitable troubles in paradise. It is a novel with a theme that hits close to home, because there is no perfect marriage. Perhaps on the surface, yes, I would concede. But those who claim that theirs are a picture-perfect marriage are terribly deluded. 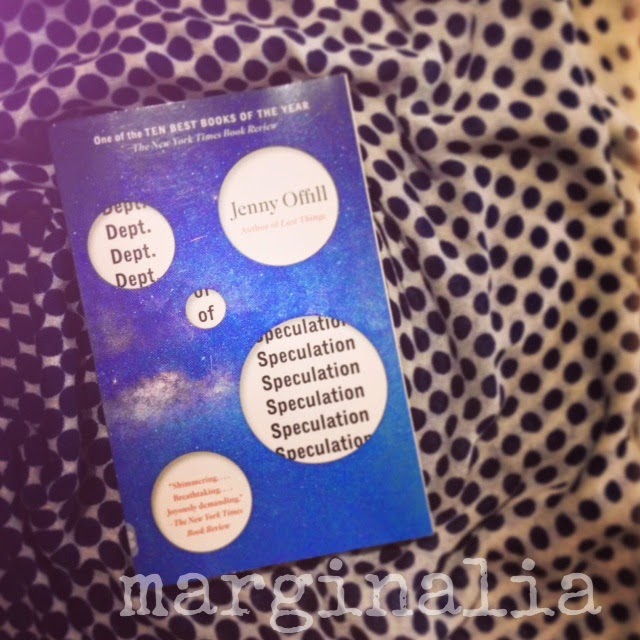 The novel is so short that it can be actually finished in one sitting, if you have the luxury of time. The first parts are told in the first-person point of view of the Wife, one half of the marriage, as she articulates her thoughts about her husband, her marriage, her colicky child. The narrative is peppered with quotes, proverbs, and pieces of life and domestic advice, intelligent or otherwise.

A Lebanese proverb: The bedbug has a hundred children and thinks them too few.

Advice for wives circa 1896: The indiscriminate reading of novels is one of the most injurious habits to which a married woman can be subject. Besides the false views of human nature it will impart… it produces an indifference to the performance of domestic duties, and contempt for ordinary realities.

[What the fucking fuck. I am glad I am born into this generation.]

Through the years, in between writing a book about space and cosmonauts and heavenly bodies and raising a husband and a daughter, the Wife even writes down her conversations with herself.

What do you want?
I don’t know.

What seems to be the problem?
Just leave me alone.


When trouble in paradise begins, the narrative suddenly shifts from first-person to third-person point of view. Then we read about the Wife and the Husband as they dance about and around each other, feel their rage and sadness and all the raw emotions leap from the pages. The shift portrays an abrupt detachment, as though the Wife has tired of telling her story and an omniscient narrator has taken up the narrative where she has left off.

Despite the apparently disjointed storytelling, Dept. of Speculation is a readable, straightforward, and sincere book about the joys, sorrows, and realities of marriage. But that doesn’t mean only married people will enjoy this book; it is also a novel infused with emotional insights and life lessons that cater to no specific age or marital status. And the best thing about the book for me (well, my copy at least)? Wide, wide margins. Dept. of Speculation and me, we talked.

If you are tired of everything you possess, imagine that you have lost all these things.

Anonymous said…
I've been seeing this book more and more often whenever I visit Fully Booked. And now I see this review. Maybe it's a sign for me to read it? Heh.
April 16, 2015 at 11:15 PM