The Known World is an epic novel on black slavery. What’s different about this novel is that instead of the usual white people owning black slaves, here it’s also black people – the master a former slave himself – owning their kind. 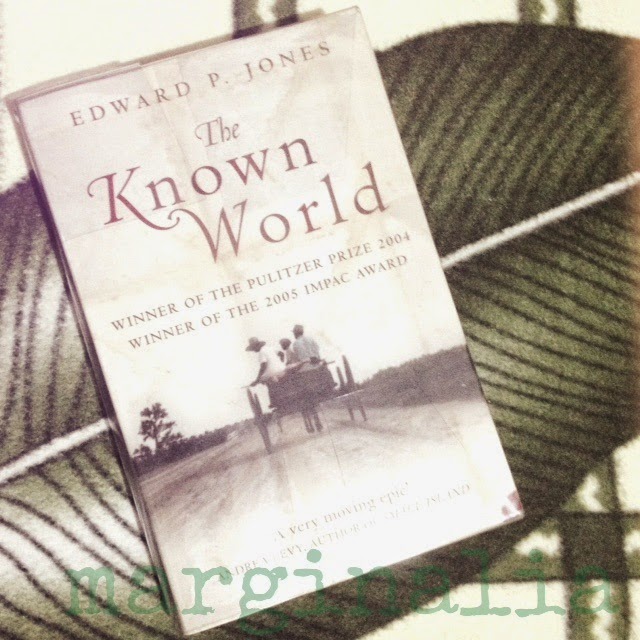 Henry Townsend and his parents, Augustus and Mildred, were the slaves of William Robbins, the richest, most powerful, and most influential white man and plantation owner in Manchester County, Virginia. Through diligence and frugality, Augustus and Mildred were eventually able to buy their freedom and, years later, Henry’s, from Robbins. However, in the interim that Henry was left as a slave in Robbins’s plantation, he becomes somewhat of a protégé, earning his master’s trust and approval. When Augustus and Mildred subsequently buy their son’s freedom, Henry is learned in the ways of his old master. He earns enough money to buy a plantation, with the help and advice of Robbins, and thereon constructs a house and later, buys his first slave, Moses. Moses will eventually become the overseer and, as the plantation grows, is followed by other slaves. Henry also takes a wife, Caldonia, but he dies without having any children.


In fact, this is where the novel begins: Henry’s death. From there, we read about his widow Caldonia, as she struggles to keep the plantation (and the slaves) together the way Henry would have done, which wasn’t an easy task considering that she lacked her husband’s steadfastness and strength. We also read about Moses, how he first came into the plantation, his daily tasks as an overseer, and his relationship with his wife, child, and fellow slaves. There’s also the story of Sheriff John Skiffington, the white county sheriff who perseveres to render justice where justice is due. We even read about William Robbins, who keeps a white wife and daughter in his house but loves a black woman with whom he sires two children and to whom he goes for love and comfort.

These and other stories make up The Known World – and the travails of the characters are sure to evoke feelings you never thought you would have towards fictional characters.

Of all the stories interspersed in the novel, it was the story of Henry’s parents, Augustus and Mildred, that stayed with me long after I was done reading. After having purchased their freedom (as well as Henry’s), they settled in a place far from Robbins’s plantation, where Augustus made a living as a carpenter, making furniture and small wooden things that he sold and shipped as far as New York. He would usually deliver these pieces of furniture if he were able to.

The most unfortunate of things would befall him and, as a consequence, his wife. When the incident transpires, he is utterly helpless, but he stands his ground. My heart fell apart as I read word after depressing word about the fate that befell him, and it was then that I questioned why justice would be so elusive to people like him.

As a related story, I also rooted for Sheriff Skiffington because I found him a decent, respectable person who will uphold the law no matter the color of one’s skin. However, the question of what the law imposes and punishes are a different matter altogether, but for what it was worth, Skiffington was one of the better characters in the book despite his inner personal struggles.

I struggled just a little when I was first starting to read this, because there was an influx of characters that I found both distracting and confusing. I actually put this away in favor of another book, so when I picked it up again to resume reading, I worried that I might have already forgotten most of the characters. Fortunately, the narrative provided mnemonics and I realized that it was not necessary to memorize virtually every single name. “Elias and Tessie, his daughter…” “Caldonia remembered that Fern, her teacher…” “She was there with Dora and Louis, Robbins’s children with his mistress, Philomena…” It was something that I appreciated a lot together with the lyrical language, which I found was quite moving, as well.

The Known World is a book perfect for discussion with other readers. It explores slavery, the relative concepts of good and evil, justice, and even religion. The characters are fully fleshed out that it was impossible not to feel sympathy, or rage, or love towards any of them. Slavery and all its associations and imagery couched in beautiful language – this is The Known World.

"There was a reason God had made telling the truth one of his commandments; lying had the power to be a high wall to hide all the other transgressions."

Anonymous said…
Very eloquent review! I loved the inclusion of not-quite magical realism in the story and how it didn't distract from the true focus of the narrative.

There was one sequence that described the progress in Celeste and Elias's relationship that made me cry so hard, something I didn't quite expect. Same with Augustus and Mildred. Jones has this amazing way of conveying tenderness even amidst all the tragedy and ugliness.
April 20, 2015 at 7:03 PM

Anonymous said…
Yay! Great review. It reminded me a lot of the plot points, which I've mostly forgotten. What remains are my feelings for this book.
April 21, 2015 at 3:10 PM