Aristotle and Dante Discover the Secrets of the Universe

Aristotle and Dante Discover the Secrets of the Universe is the coming-of-age story of two young men, the titular characters Aristotle and Dante. You might think, oh, it’s just another one of those coming-of-age YA novels that the market is peppered with these days. Yes, it’s one of those transition stories – one that overflows with teenage angst and emotional turmoil, the works – but I would venture to say that this one is rather special, because more than just discovering the secrets of the universe themselves, their personalities and sexuality, Aristotle and Dante learn the value of honesty and acceptance. 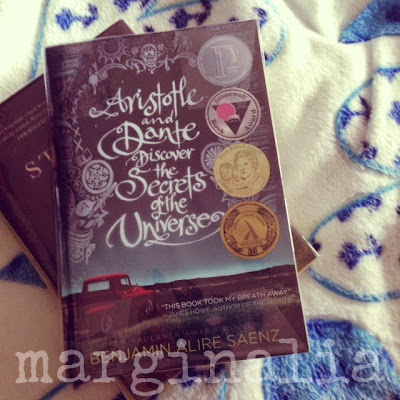 I first heard of the book last year. Someone from within my bookish circles declared it as his best read for the year, and I was curious. The book is heaped with a ton of YA literary awards: Stonewall Book Award for Children’s and YA Lit, Lambda Literary Award for LGBT Children’s/YA, and it was also a nominee for the Printz Award. (In fact, the cover of my edition is overwhelmed with the stamps of these various accolades. A waste of a beautiful book cover, if you ask me, but it cannot be helped, I guess.) So when the chance to read via the book club presented itself, I jumped at the chance.

I’ve read enough of these coming-of-age stories to know what to expect in Aristotle and Dante, but that didn’t keep me from rolling my eyes at Aristotle’s overflowing teenage angst and anger at the world. Yes, between him and Dante, he was the kid with all the drama and the issues. Who could blame the boy, though? His father, a Vietnam war veteran, is distant and kept to himself. His mother doted on him and obviously loved him very much, but she could not be convinced to tell him anything about his older brother who was in prison. Aristotle resented the secrecy because he had no memory of his brother, and he craved someone to look up to, someone who he knows is there aside from his parents. And this longing for his brother – at the very least, the knowledge of what happened to him – consumed Ari, and became a source of resentment towards his parents.

On the other hand, Dante was, for the most part, the level-headed one. For someone of his age, he is more or less comfortable in his own skin and sexuality, and it cannot be denied that this attitude is the product of his parents’ upbringing. They were open-minded and quite accepting. Not to say though that Ari’s parents weren’t. But Dante and his parents are one step ahead of Ari and his parents in terms of Ari’s personal and emotional growth. Ari’s family had more issues to resolve than Dante’s, and it was uplifting to watch them go through the journey, as a family, and conquer these issues, finally and with finality.

Aristotle and Dante's friendship is young, but they can learn to grow and mature together. They have a long way ahead of them, but I think they'll manage.

Having been written for a young audience, the novel was very easy and convenient to read, but it will not satisfy one’s literary appetite. But I liked the fast-paced and straightforward dialogue, although sometimes the conversations between parents and children tended to veer towards impertinent language on the latter’s part, making me cringe. I appreciated the easy-going and comfortable relationship between the boys and their parents, but I still believe that kids should, at all times and in all situations, accord respect to their parents. Aristotle and Dante were always on the verge of crossing that line, if they haven’t already, and their parents were amazingly understanding the entire time. I admire them in that respect.

In the end, what matters is acceptance.

"To be careful with people and with words was a rare and beautiful thing."