Station Eleven is, so far, my best read for this year. 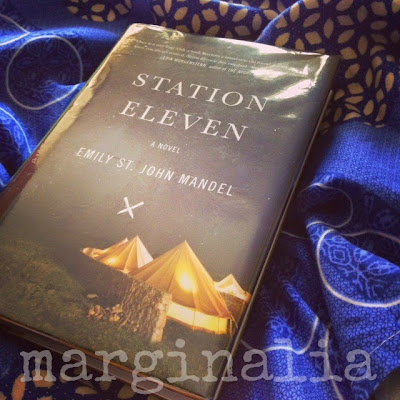 It begins with a scene from King Lear, the title role played by famous Canadian actor Arthur Leander. Onstage, as he articulately delivers his lines, he suffers a heart attack. Jeevan Chaudhary, an emergency medical technician-in-the-making seated at the front row, rushes to give him first aid. On the side, a little girl actress named Kirsten Raymonde watches, horrified, as Jeevan’s attempts at resuscitation fails. That same night, hours after Arthur’s death is called and as Jeevan walks around the city contemplating his relationship with his girlfriend, Laura, a highly contagious virus that causes a sickness called the Georgia Flu begins to spread, and fast. Very fast. Within days, civilization and life as we know it degenerated – and Jeevan was lucky enough to escape it.

Fifteen years after the “end of the world,” we find Kirsten with a group of nomadic actors called the Traveling Symphony that performs Shakespeare and music as they move from town to town. Their dictum: “Because survival is insufficient.” They wanted to find the Museum of Civilization, said to be in an airport in Severn City, but on their way they encounter a self-declared prophet whose beliefs and intentions were suspect.

There is something in Station Eleven that struck a chord with me so deeply that I still think about it until now. I am not exactly a fan of the dystopian, post-apocalyptic sub-genre of fiction because I find it too depressing, too gloomy. Station Eleven is exactly that – post-apocalyptic and gloomy, and scary, from my "I am Legend-ish" marginalia on my copy – but it resonated with me because it also spoke of remembrance, of memories, and of hope.

I must admit that at first, I was cynical of the events that followed after the Georgia Flu wiped out nearly all of humanity and civilization – imagine a life without electricity, running water, gasoline, and society, with its laws and currencies and various systems – all over the world. Actually, I was cynical of this one thing: the Traveling Symphony, a band of nomadic musicians and actors that perform Shakespeare and play music for the inhabitants of the towns that they travel to. Kirsten, the child actress from King Lear from over a decade and a half ago, has joined them, and continues to play her Shakespearean roles when she’s not throwing knives or scouting for the symphony. Like them, she has learned all about survival.

Which, I thought, must be the whole point of their existence, now. Right? Having survived the Georgia Flu, one would assume that they would be focused solely on that one thing: (further) survival. I would not have imagined that anyone in that situation would still find the necessity to put on costumes, play obsolete theater, and make music for fellow survivors. It took me a while to finally grasp their presence, and I had to learn the Star Trek-inspired adage that they lived by: “Because survival is insufficient.”

There is one more thing that I loved about Station Eleven, and that is the interconnectedness of the characters. It was reminiscent of David Mitchell’s Cloud Atlas, another favorite. I loved how certain characters from the previous civilization – living or dead – were connected somehow to the survivors of the Georgia Flu. It felt like they were linked by an invisible bond that transcended the apocalyptic obliteration of civilization, and for those who have passed on, through the memories that they have left behind.

This brings me to a subject that always, always strikes a chord with me: to be remembered. Memory. Immortality; to be indelible. This is my favorite passage from the book, which I think encompasses exactly how I feel:

“I’ve been thinking lately about immortality. What it means to be remembered, what I want to be remembered for, certain questions concerning memory and fame. I love watching old movies. I watch the faces of long-dead actors on the screen, and I think about how they’ll never truly die. I know that’s a cliché but it happens to be true. Not just the famous ones who everyone knows, the Clark Gables, the Ava Gardners, but the bit players, the maid carrying the tray, the butler, the cowboys in the bar, the third girl from the left in the nightclub. They’re all immortal to me. First we only want to be seen, but once we’re seen, that’s not enough anymore. After that, we want to be remembered.

This is my first time to read Emily St. John Mandel, and I have to say that I loved her writing. To borrow the words of the king of Westeros himself, George R.R. Martin, Station Eleven is “beautifully written, and wonderfully elegiac.” I could not agree more. It is a literary dystopian novel that explores the extinction of civilization and the possible birth of a new one, retaining the good things from the old, told in lovely language that pinches the heart. I love the resilience and will of the characters, the shifting of the narrative from past to present and how it all ties up in the end, and the various story arcs – Station Eleven is actually a graphic novel written and illustrated by one of the important characters – that involved and connected each character to the other. I love Station Eleven so much I’m still not over it, even until now.

“Miranda opened her eyes in time to see the sunrise. A wash of violent color, pink and streaks of brilliant orange, the container ships on the horizon suspended between the blaze of the sky and the water aflame, the seascape bleeding into confused visions of Station Eleven, its extravagant sunsets and its indigo sea. The lights of the fleet fading into morning, the ocean burning into sky.”

Lynai said…
I agree that dystopian novels make me feel gloomy and sad. But this review sufficiently convinced me to give this book a try. Lovely post, Monique! :)
May 28, 2015 at 3:20 PM