The Queen of Attolia (The Queen's Thief, #2) 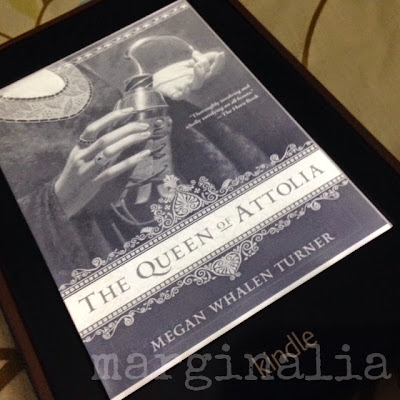 The Queen of Attolia was better than its predecessor in the series, The Thief, but given the chance, I would still not read it on my own volition. I picked it up only in answer to a challenge/recommendation by our book club discussion moderator for the month. I still wish I had been given another book to read.

There were a lot of handicaps when I first started reading The Queen of Attolia. First is the fact that I can no longer remember the plot of The Thief, which I read years ago, perhaps owing to its lacklustre appeal and forgettable storyline. I had to read a lot of spoiler-filled reviews of The Thief just to reacquaint myself with the characters, kingdoms, and other important details. Second is that I was under time constraints to read it, and it took me a while to get used to the third-person narrative. But I ignored the looming deadline and promised myself to read it properly, because a lot of people have been telling me to give Eugenides another chance.

I did, but he still fell short.

The Queen of Attolia failed to convince me that the series is worth completing. I am no stranger to fantasy-YA, but this one I just couldn’t quite get a grip on. There was nothing new or inventive in it – in fact, the fate of Eugenides in the hands of Attolia (pun intended) in the first parts of the book was predictable. The stories of warring kingdoms and cold monarchs and fighting armies offered nothing new, and I was disappointed. I could even smell that love story coming from a thousand miles away.

Eugenides was supposed to have developed as a character in this sequel, but I didn’t see it. What I saw, however, was what Attolia herself saw: a fumbling boy just in the cusp of adulthood who was simply fortunate to be a member of the Eddis Royal Family. Even Attolia, who was supposed to have been shrewd and calculating in this book, was like an open book: she was so easy to read. I could anticipate her next move, guess her plans correctly. I read on simply to confirm that I was right in my suppositions all along.

I wanted to rate this book a 2, or a 2.5 at the most. But because it was better than The Thief, which I rated 3, I am constrained to give it the same rating. Unless, of course, I change my rating for The Thief from 3 to 1, in which case I could give The Queen of Attolia a 2. But I won’t. I just won’t be as generous next time.