Redeployment is a collection of short stories about the war – particularly the US-led war in Iraq that began in 2003 – and its effects on its major players (and casualties): the civilians and the soldiers. Mostly the stories dealt with death, and if one is lucky enough to survive, the long-term effects of war, emotionally and psychologically. Hello, PTSD (post traumatic stress disorder). 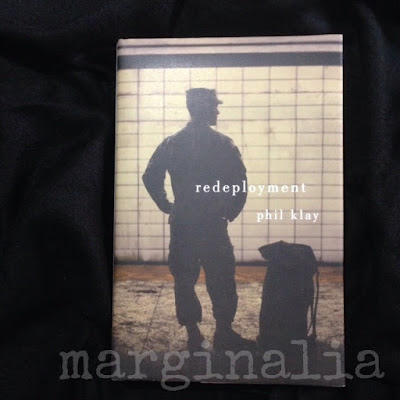 There are 12 stories that make up the book: Redeployment, Frago, After Action Report, Bodies, OIF, Money as a Weapons System, In Vietnam They Had Whores, Prayer in the Furnace, Psychological Operations, War Stories, Unless It’s A Sucking Chest Wound, and Ten Kliks South. Except for vague recollections of particular scenes, however, I can no longer remember each story with accuracy – they were that forgettable for me. Redeployment, the first story, was about shooting stray dogs as they conduct operations in Iraq, when the narrator himself was a lover of dogs back home. There’s a story there about a veteran who was severely and physically injured after he was nearly blown off in an explosion, and because he was lucky enough to have survived, a girl wanted to interview him for a story. Another story was about a marine who wanted to confess something to their resident cleric but hesitates each time they meet. And these two latter stories are just a couple whose titles I can no longer remember. The others, I cannot recall without taking a peek at my copy.

Oh I remember. There was a story that contained nothing but military acronyms that I felt like it was the author rattling off all the existing military acronyms in the world. It was so terrible and it took a lot of effort to read because I would try to Google each acronym I encounter, for context, until after a couple of pages, I gave up. Here’s a snippet (the story is called Frago and yes, I checked my copy):

HUMINT says the place is an IED factory filled with some bad motherfucking hajjis, including one pretty high up on the BOLO list. SALUTE report says there’s a fire team-sized element armed with AKs, RPKs, RPGs, maybe a Dragunow.

After that, there’s not much left to do but hit the DFAC. We’re on a FOB, might as well get that good chow while we can. My guys deserve it. Maybe they need it. Besides, everyone says TQ’s got the best chow hall in Anbar, and soon we’ll be back in the COP.


Now excuse me if I am unfamiliar with military or army jargon, but I would think that a writer should never presume that all his readers would know the meaning of these acronyms, especially since it doesn’t appear that he wrote this for a specific audience only. It was tedious to look up what each acronym stands for and looking for context clues did not work most of the time. Sure, AKs and RPKs and RPGs most likely stand for weapons, based on context clues, but what about “DFAC”? “TQ”? “HUMINT”? Am I presumed to know what these are?

It was touching and at the same time disturbing to read about the dangers to which the marines/soldiers are exposed every time they are deployed to some war-stricken country. The injuries (and/or deaths) and especially the psychological trauma are scars that they will forever bear. But let’s also not forget the innocent bystanders, especially the children, who can no longer lead normal, happy lives because of the war. The wives and families who get left behind - they, too, stand to suffer, the fates of their husbands and fathers and sons thrown out into the wind. On this score, I appreciated this novel, but then again, perhaps I could have just read about it in other well-written, well-thought out works on war.

And I still cannot fully grasp that this book prevailed over Station Eleven in the most recent National Book Awards.