The Maltese Falcon was the book club's book for the month of June. I missed the actual discussion but I had fun reading it and talking about it online with the folks at the book club. 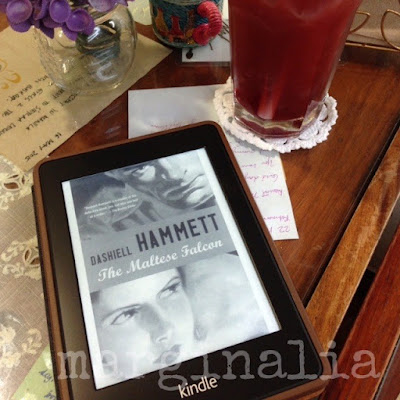 Set in 1920s San Francisco, The Maltese Falcon is a hard-boiled detective noir story. The main protagonist is Sam Spade, the detective hired by femme fatale Brigid O'Shaughnessy to tail a certain Floyd Thursby, who allegedly kidnapped her sister. The story is fake, though, and when Miles Archer, Spade's partner, was shot to death while he was on Thursby's trail that same evening, Spade will discover what Brigid has actually hired him for: to trace the location of the invaluable Maltese Falcon, a historical artifact. While Spade hunts down the Falcon, however, he is also hunted down not only by the police, who have him figured out as prime suspect for the killing of both Thursby and Archer, but also by devious characters who would do anything to get the Falcon first.

The Maltese Falcon is a short and easy read. It was fast-paced and dialogue-heavy, which I think is effective for a plot-driven work such as a detective story. The characters were all interesting, especially Joel Cairo, the queer crook who was after the Falcon - among others. Brigid O’Shaughnessy managed to annoy me from her first appearance up until the end, while Spade himself came off as a mystery, as his real feelings and thoughts were not apparent. In fact, because Spade’s point of view was conveniently concealed, the reader is left to speculate on his sense of morality and opinion on things. Thus, from the characters alone, The Maltese Falcon worked for me.

Plot-wise, as with all private eye stories, it was an extended guessing game, a whodunit thing with smartly crafted red herrings for more fun and confusion. It was only a matter of time before the smart reader could figure out the whole picture. (I had my reservations about the identity of the killer/s of Thursby and Archer, but I was sure about one thing: the obvious suspect and the motive for killing were exactly that – too obvious [and shallow] to be real.) Don’t be stressed, though, if you guessed wrong – it is just as fulfilling to read the story as it ties up all the loose ends in conclusion as to correctly guess the identities of the culprits.

While style-wise, The Maltese Falcon fell short of my expectations, I nonetheless enjoyed reading it. It was able to sustain my interest enough to keep me reading until the end, largely due to the ability of the characters to rein you in with their variety and motivations. And while I wouldn’t purposely seek out another Dashiell Hammett mystery anytime soon, I am not closing any doors to the idea of delving into noir again, c/o Hammett, if the opportunity presents itself.

"I'm a detective and expecting me to run criminals down and then let them go free is like asking a dog to catch a rabbit and let it go. It can be done, all right, and sometimes it is done, but it's not the natural thing." - Blond Satan aka Samuel Spade

Tin said…
You know what I think my high rating was greatly influenced by how much I enjoyed the audio. The narrator was doing really awesome voices for each of the character, it kinda felt like one of those old radio shows. I have a feeling that if I just read the ebook, there is a chance that I'll like this less. Or not. Haha. But yeah, nevertheless it is a pretty solid detective noir story. And I agree on the characters, they were mighty interesting. :)
July 19, 2015 at 6:17 PM

Monique said…
TIN: One of these days I will give audiobooks a try, just for the experience. The trouble with me is that I tend to get easily distracted! :))
July 20, 2015 at 9:51 AM