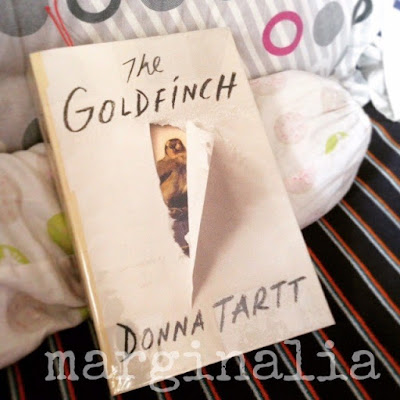 The Goldfinch is the story of Theo Decker, a thirteen-year-old New Yorker who survives a bomb blast in a museum that kills his mother. With his father off in Las Vegas with a new girlfriend, Theo is taken in by the Barbours, the affluent family of a friend in school. Theo is left with the memories of his mother and his “picture” – The Goldfinch, a small 1654 painting by Carel Fabritius which he took with him from the museum on the day of the accident upon the prodding of an old man, Welty. Before he died in the museum, Welty purposely “led” Theo to his furniture shop in the Greenwich Village and his business partner, Hobie. Eventually, however, Theo’s father, Larry, finds him and takes him to Nevada, where Theo meets Boris, his foul-mouthed, drug-addicted friend with whom Theo will spend much of his teenage years. Circumstances will ultimately compel Theo to return to New York – now a young man – where he continues to live a shady life, longing for his mother, clinging to the one thing that he knew bound her to him even in death: The Goldfinch.

If you really want to know what this novel is about, I would strongly suggest reading plot summaries or reviews and just skipping the book altogether – it is not worth it. It is the kind of book where everything is happening but nothing is happening at the same time, if you understand what I mean. And it dragged – oh my god, did it drag. Many times over did I feel the urge to skip chunks and chunks of paragraphs just to know what will happen next, or perhaps just to get it over with. Maybe both.

Theo is the protagonist with whom I wanted so badly to sympathize, but the desire to whack him on the head – hard, and repeatedly until it renders him unconscious – or to strangle him with my bare hands always wins. The first few chapters were very promising: it described Theo’s relationship with his mother, their life together in New York sans the truant father, and the museum accident. His mother’s death left Theo completely lost, and my heart went out to him, even when the Barbour family benevolently took him in. He had a chance at living a good life especially after he met Hobie, the big-hearted man who restored furniture at the Greenwich village from whom he learned all about the furniture trade. Theo’s life began to decline, I think, when his father Larry and his girlfriend Xandra suddenly showed up at the Barbours’ and decided that they wanted to bring him back with them to Las Vegas.

Sure, Theo was just a kid. Sure, it was no joke losing your mother and suffering from PTSD thereafter. Sure, if was hard fitting in at a new school, making new friends, starting over. But dammit, when the first signs of trouble have manifested themselves and you know how hard it will screw your life over, it is prudent to take a step back and re-evaluate where you stand. I had the impression that Theo was a good kid, with enough sense in him to assess what is right and what is wrong, who can rise above his troubles and emerge whole. But Theo disappointed me. I cut him a bit of slack, but he ended up still disappointing me.

And on he went to screw up his life, with the enthusiastic assistance of the fates. One unfortunate thing led to another, and against my expectations of resilience, Theo rode along, letting himself be used and abused, squandering his life away. Just as something good was happening, Theo would take matters into his own hands and throw it all away again. I wanted to cry out in frustration. I wanted him to be in control of his own life – because he can! – but it wasn’t like that at all. Theo, you stupid boy. Theo, you stupid, silly boy!

The character I loved the most was Hobie, the big guy with a soft heart with whom Theo had become close friends. Hobie was gentle, firm, and level-headed, even when angry. He was a good influence to Theo, and he had his best interests at heart. On the other hand, Boris, Theo’s friend from Nevada, was the exact opposite: he was a bad influence to Theo, and it had always been his “bright” ideas that put Theo and him in trouble. Of course Theo was the bigger fool for keeping friendships like that, but Theo would have been less tempted to get himself into trouble than with Boris around.

Many consider The Goldfinch as a coming-of-age story. Hence, Theo, the young person subject thereof, would necessarily undergo many transformations and go through realizations, all of which will be grasped after a (prolonged) period of agony and series of problems. I’ll take that, but the unfortunate events to which Theo was rendered vulnerable – and successively at that – were self-destructive. Moreover, there were chapters and events that proved unnecessary and served no other purpose than add more pages for the reader to digest, and make him wonder what the whole point of the novel is. Theo’s life sucks: we get that. But I have better things to do with my time than to read 771 pages about a teenage boy’s sucky life – and don’t give me that bull about coming-of-age stories. The Goldfinch ends with an adult Theo who still doesn’t know better, so no, don't give me that about him coming of age.

The last part talked some about life, history, and love that I know I would have appreciated at any other time, but my annoyance washed all that away. What a shame for a Pulitzer winner.

Peter S. said…
Awwww . . . . What a shame that you didn't like this novel. Is this your first Donna Tartt? I really, really love her books. I read The Secret History at an age that is almost the same as the character, so I was able to relate to the book at a deeper level. I also love The Little Friend, and I believe that people are now starting to see that it is a good novel indeed and can stand side-by-side with The Secret History.

Monique said…
PETER: Donna Tartt is no doubt incredibly talented but I didn't like the execution of The Goldfinch. Yes, it is my first Tartt book, and it looks like it might be the last as well. :(
August 11, 2015 at 2:31 PM

Anonymous said…
But, but, but aren't there many adults who don't know any better? Anyhoo, I have a fresh copy of this, might pick it up next year to see where this uhm, rage is coming from.
August 11, 2015 at 6:29 PM

Me, myself and I said…
Well written review with some enjoyable snarkiness thrown in ;-) I got through he first 80 pages or so before calling it a day, now the caveat being I had just finished Shantaram, that other 900 page+ plus brick of pointless philosophical meanderings ... anyway I just couldn't stomach another so went for a little bit of sci-fi to mix things up a bit, and let my mind wander to the future of how we will live with giant man-killing bugs.
December 25, 2019 at 9:14 PM