Bring Up The Bodies (Thomas Cromwell, #2)

Bring Up The Bodies takes up where Wolf Hall broke off: Thomas More and John Fisher have been executed, Queen Catherine of Aragon and her daughter Mary have been exiled in a place somewhere far from London, and Henry has finally married his concubine, Anne. (These details are in the history books so they are not spoilers.) Thomas Cromwell, Henry’s current right-hand man, awaits his master’s next bidding. 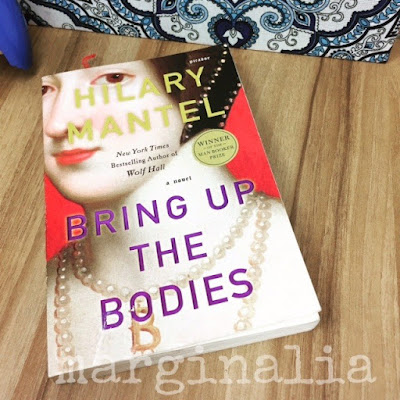 This sequel wastes no time getting into the story. This is the point when Anne has given Henry a daughter, but not a son – the heir to the throne – and Henry is getting a little impatient. Anne is not getting any younger either – not as young as she used to, of course, in terms of childbearing – and it was imperative that she be able to give a him a son, or (very likely) lose her head. Literally. It doesn’t help that Henry has set his wandering eyes on plain, quiet little Jane Seymour, of the Seymours of Wolf Hall. When it becomes apparent that Anne can no longer bear Henry’s heir, Henry suddenly realizes that his marriage to Anne is, in fact, bigamous and, therefore, of no legal effect, and Cromwell sets about finding ways to eliminate her so that Henry could be free to marry Jane. Anne herself makes Cromwell’s life easier, what with talk of her adulterous relations and the sudden obtainability of witnesses to attest to her clandestine affairs.

Bring Up The Bodies was easier to read than its predecessor – or perhaps, I had just gotten used to the writing? Or I already knew what to expect? Either way, I enjoyed reading this very much and did not realize that I was already through with it not long before first picking it up. Such a far cry from the struggle that I went through just to be able to finish reading Wolf Hall a couple of years previous.

Perhaps I was impelled by a secret desire to see that Anne gets what she deserves? I have always been sympathetic towards the “old queen,” Catherine, whose countenance and class are admirable, having been descended from the Royal Family of Spain. I thoroughly enjoyed the silent war between Cromwell and Anne, especially the parts where Cromwell began to gather evidence against her, the arrests, the interrogations and the confessions. Because she was an unpopular queen, Cromwell’s task was accomplished quite easily. But Cromwell himself was not without talent – only a lawyer of his calibre and cunning would be able to weasel out confessions from unwitting witnesses, so credit is due him. That Henry would be free again to pick a new wife seems a small thing compared to the fact that Anne would finally get her due, that she would be able to feel how it is to be shunted aside in favor of someone else – exactly what Henry did to Catherine when she came into the picture.

The third book in the trilogy, The Mirror and The Light,  is yet to be released, but I hope it will be, soon. I am looking forward to the conclusion of the Tudor saga, as re-told by Hilary Mantel.

"When the time comes I may vanish before the ink is dry. I will leave behind me a great mountain of paper, and those who come after me ... they will sift through what remains and remark, here is an old deed, an old draft, an old letter from Thomas Cromwell's time: they will turn the page over, and write on me."