How to be both

How to be both is a novel divided into two parts: Camera, the story of teenager George, whose mother’s sudden death has left her grasping and attempting survival, and Eyes, the story of real-life Renaissance artist Francesco del Cossa, an Italian. Their stories are divided by centuries and yet they are connected: on the surface, the connection can be seen when George and her mother went to Italy to see a fresco painted by del Cossa. Because that trip turned out to be the last one Georgia will ever have with her mother, she remembered the painting and the artist. 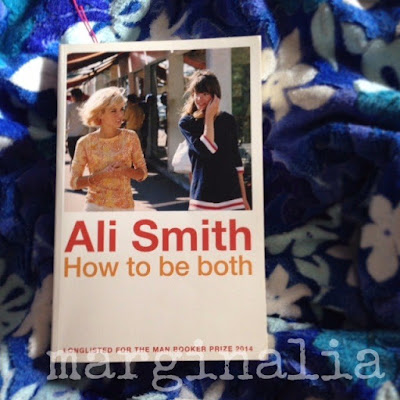 But there is a deeper, more intimate connection between del Cossa and Georgia than meets the eye, a link that is stronger and more passionate than that forged by a one-time visit to an artwork of centuries ago. That is, for this reader, the crux of How to be both.

Printed copies of How to be both are published in two ways: some editions have Camera printed first before Eyes, and some, Eyes first. Supposedly, it doesn’t matter which one you read first, because one story simply mirrors the other. The styles of the stories are different, as they are told from two different points of view: Eyes is the stream-of-consciousness, first person POV of del Cossa while Camera is told from the third person POV of George. Interesting premise, and I was sold. But I could not say I was satisfied.

On my own print copy, Eyes came first, which I did try to get into before Camera. Perhaps, I thought, I was really meant to get that copy because that was how I was supposed to read and understand the novel. Unfortunately, the stream-of-consciousness narrative took me off-guard, and I struggled with it for a few days before I decided to pause and instead, read Camera first. In contrast, George’s story read relatively easier, although the lack of punctuation threatened to do away with my appreciation of her story and her relationship with her mother.

And what a relationship that was. George was a real smart mouth, a grammar Nazi, and an angst-filled teenager, but when she lost her mother, her tough exterior melted and we are allowed a glimpse of her compassionate, soft side. Her fondest memories of her mother were of their trip to Italy to see del Cossa’s work, and somewhere in the middle of her narrative, that connection to del Cossa will manifest.

Del Cossa’s story, Eyes, was equally interesting because he was a real-life Renaissance painter who, per author research, worked on frescos in Ferrara, Italy until he became extremely dissatisfied with meager wages. In this novel, Ali Smith takes del Cossa’s persona and re-fashions him into a female who binds her chest and pretends to be a man in order to land more jobs and earn more commissions for paintings. There were anecdotes about Franchesco – the name Smith has given to this protagonist – involving whores and sexual adventures that I found amusing. Oh, and Franchesco's story is narrated by his spirit, who appears to have traveled the time vortex to appear and be felt in George’s present.

Are we starting to figure out the connection between these two protagonists?

Both stories move forward and backward freely through time, and eventually (I hope) the reader will see how the seemingly simple story of each one is intertwined with the other. Gimmicky? Perhaps, but we’ve seen gimmick before, and some have actually worked. In How to be both, I perceived the time-transcending connection from miles away, but it did nothing for me. The idea of the two stories mirroring the other sounded appealing of course, but I appreciated them separately in any case, and it worked for me just the same. The existence of the two characters, despite having occurred hundreds of years apart, had strength and power by themselves.

Perhaps I failed to fully grasp the intention behind the interlaced stories, because for what it was worth, I felt that something was missing. Or perhaps something was in excess?

"Do things just go away? her mother says. Do things that happened not exist, or stop existing, just because we can't see them happening in front of us? ... And what about the things we watch happening right in front of us and still can't really see?"

Anonymous said…
The copies that I saw in Kinokuniya all had Eyes first. I heard in a podcast that Camera is easier (which you also pointed out) so I looked for a copy with Camera first. But every copy in the stack had Eyes first (I'm talking of ten copies here). So I suppose it's not as random as the marketing says it is.
September 3, 2015 at 2:59 PM