Stone Mattress: Nine Tales is a collection of nine short stories that are a combination of funny, witty, clever, and dark. While I am no stranger to Margaret Atwood’s fiction, having previously read The Handmaid’s Tale and Booker winner The Blind Assassin, both of which are worthwhile reads (if you haven’t read them yet – what are you still doing??), this is my first foray into Atwood’s world of short fiction (after Happy Endings, a short story previously featured in The Short Story Station). 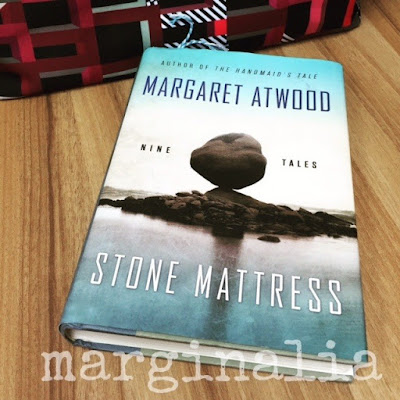 Needless to say, I enjoyed each and every tale in this collection, albeit in varying degrees, as there were stories that I liked more than the others. Alphinland, Revenant, and Dark Lady, the first three stories, had interconnected characters; each story featured one of the characters in a love triangle that began (and ended) in the 60’s. Constance, the female protagonist in Alphinland, is the author of a series of fantasy novels set in an imaginary world called Alphinland, which she began writing when she was still living with Gavin, a poet, who is the main protagonist in Revenant. Their love affair was interrupted by the third party in the triangle, Marjorie, who was supposedly Gavin’s muse in his Dark Lady poems, as featured in the story Dark Lady. All of them are now in the twilight of their years, with practically one foot out the door. In fact, I think that's the theme shared in common by these nine tales: an exit – whether from life, a circumstance, or a situation, whether occurring naturally, self-imposed, or forced upon them.

Lusus Naturae read like a YA paranormal story, featuring a creature that thirsted for blood, slept during the day, and prowled the neighborhood at night. The poor creature did not wish its predicament upon itself, having been born that way, and despite its efforts to be left to its own devices, fate did not want to leave it alone. The Freeze-Dried Groom began as a typical story about a couple’s marriage being broken apart, but it surprised me with the rather creepy narrative about a storage unit filled to bursting with wedding-related things – yes, including the groom. I Dream of Zenia With The Bright Red Teeth and The Dead Hand Loves You continue the preternatural, bizarre tone initiated by Lusus Naturae, and I liked the Dead Hand story because aside from being weird, I also found it, for some reason, quite funny. It reminded me of an old horror B-movie with a dead, severed hand that haunted and wreaked havoc upon the protagonists. It was supposed to be scary, sure, but I had a good laugh at that one.

The last two stories, the titular tale Stone Mattress and Torching the Dusties, are my favorites. Stone Mattress is the opportunity for revenge: by sheer coincidence, Verna, the female protagonist, comes face-to-face with Bob, an old high school date, who sexually assaulted her after a prom night years ago. Now in their golden years, they are traveling by themselves on a cruise in the Arctic, and Bob doesn’t recognize Verna as the young girl he had molested from decades ago. Verna entertains revenge, and contemplates ways on how to exact this revenge upon Bob.

Finally, the closing tale, Torching the Dusties, takes place inside a posh apartment/manor/retirement home for (rich) aged people. The elderly residents of the manor get trapped inside when members of an anti-elderly movement called Our Turn amass outside the gates and block off all ingress and egress to the manor, chanting and raising signs that demand for the sweeping of the "dustballs under the bed." The movement has been reported to have set fire to other retirement homes across the country, killing its aged residents in the process. The drama is told through the points of view of two residents, Wilma and Tobias, who were fortunate enough to devise of a way to save themselves.


*
To reiterate, these well-written, wonderfully creative stories all share the theme exit. As one reads through them, the situation from which the protagonists wish to depart from, as well as the manner by which such a departure is to be made (or is proposed to be made), will be readily apparent. Verna from Stone Mattress, in her mind, gave Bob two options to “escape,” depending on whether he will be able to recognize her and whether he will apologize for what he did to her years before. Wilma and Tobias, in Torching the Dusties, like Constance, Gavin, and Marjorie from the Alphinland stories, are all in their final years and are likewise awaiting that “natural exit” – unless Wilma and Tobias get “torched” first. All the other stories have characters embroiled in circumstances where they would wish for, or will be sooner or later faced with, their respective “exits.” One would say that the stories are likewise obsessed about old age and death, and that much is quite obvious. Perhaps the more mature audience could relate to these themes more, considering the similarity in frame of mind, but with the younger readers, perhaps an "exit" could be more comprehensible.

This collection of stories seals my opinion of Margaret Atwood as one of the most prolific and talented writers today. Considering the catena of published works to her name, novels and short fiction alike, and considering as well the ubiquity of these stories both in print and in digital form, it seems like a terrible affront to her brilliance if one were to say that he/she has not read one of these works yet. Stone Mattress: Nine Tales is a testament to this author’s flair for writing short fiction, but don’t take my word for it.

“You believed you could transcend the body as you aged, she tells herself. You believed you could rise above it, to a serene, nonphysical realm. But it’s only through ecstasy you can do that, and ecstasy is achieved through the body itself. Without the bone and sinew of wings, no flight. Without that ecstasy you can only be dragged further down by the body, into its machinery. Its rusting, creaking, vengeful, brute machinery.” - Torching the Dusties