I have never read anything like Ubik. But that's not to say that I didn't like it, because I did. I do. I liked it because, even after reading 1984 some three years back, I have never read another hard-core science fiction novel that is as strange and fucked up as this one. I’ve read Ubik with the book club several months ago, and even with the intelligent discussion and opinions I’ve already heard, I still don’t know what to make of the book. It’s that complicated. 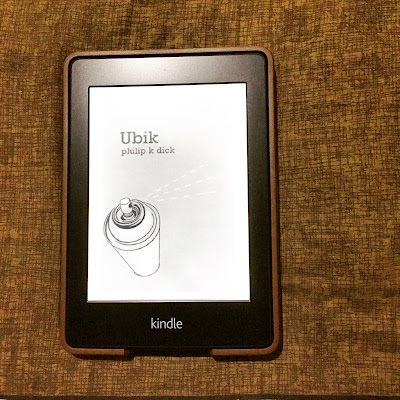 As far as I understood (and this colatilla applies to the rest of this write-up), “Ubik” is taken from the word “ubiquity,” defined as “presence everywhere or in many places especially simultaneously” or “omnipresence.” It’s one of the themes in the novel, from the way certain characters were made to appear literally everywhere as a minuscule part of a grand scheme. Other themes that I was able to pick up are the ethics and morality surrounding life and death, regression, and alternate realities. Oh, and precognition, and telepathy.

Ubik is a very engaging read. Once you get involved in the mystery that moved the plot, you’ll want to keep reading until you get some answers. While I didn’t exactly sympathize with Joe Chip, the main protagonist, I genuinely wanted him to get to the heart of the mystery and to off the bad guy that was causing so much trouble. What I didn’t prepare myself for was that answers to my questions were scarce, and it would take a while to reconcile everything that I’ve read.

I mention with particularity the moral and ethical issues posed by the “half-life” scenario in the book, which I find interesting and perhaps, in the not-so-distant future, is something that might become relevant. The idea of “suspending” people somewhere between the life and death, a sort of limbo, instead of letting them pass on is loaded with moral and ethical implications and repercussions. It would not be totally baseless to say, therefore, that theology is another important theme in the novel, and with theology comes the idea of a God, yes? Or at the very least, an omniscient, omnipresent being. Ubiquitous? Fascinating, nonetheless.

All in all, Ubik was one thrilling and mind-boggling ride. It will take you whittling through time and space, from the present to the past and then back to the present again, into outer space and around Des Moines, in the company of telepaths and precogs. It would have been great to see this on the silver screen; unfortunately, plans for a movie adaptation failed to push through. And while the writing wasn’t very impressive at all, you won’t really mind. I know I didn’t.