From the blurb at the back cover, Boy, Snow, Bird hinted a retelling. Consider this: the main character, sixteen-year-old Boy Novak – and that’s a girl for you – runs away from her abusive father, hops on a bus that takes her far, far away, and finds herself in a quiet town where she subsequently marries a local man, Arturo Whitman. There’s a catch, though: Arturo is a widower and has a young daughter, the beautiful Snow. Everything would have been fine and dandy until the birth of Boy’s first child, Bird, who is as dark as night. Boy then realizes that the Whitmans are light-skinned African-Americans who pass themselves off as white – including her stepdaughter, Snow. With this factual backdrop, the story of Boy, Snow, and Bird unfolds. 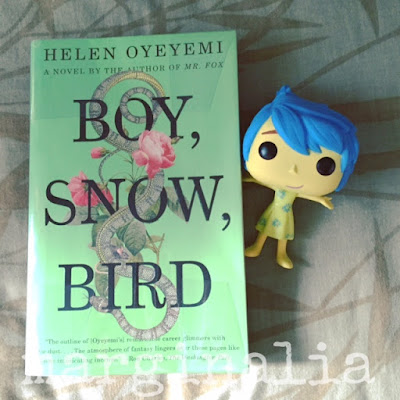 Perhaps it’s presumptuous of me to think that it would be a retelling of a particular fairy tale. But what’s wrong with that idea? Boy was described as a young wife to a widower and a stepmother to a beautiful white girl, Snow. The blurb strongly suggested a “wicked stepmother” situation and I believed it. Plus, the story concerned itself much about mirrors and reflections, two things that were given prominent focus all throughout. So, wicked stepmother + beautiful white stepdaughter named "Snow" + the proliferation of mirrors = a retelling? Why not?


Shouldn't have held my breath.

I looked forward to the resolution of the conflict brought about by the fact that Boy had a black daughter (we’ve established by now that Boy herself is white, yes?) and that she had been deceived – unintentionally? – by the Whitmans into thinking that they were white. In fairness to Boy, she wasn’t described as the sort of person who would not have married Arturo had she learned that he was a “colored” man, but then again, the novel was set at a time when black people were openly discriminated against and had no proper place in society. When she met Arturo and married him, she did not think in terms of color of the skin. So when their daughter, Bird, came out as dark-skinned, Boy’s shock was quite understandable. To compound that horror, Snow, Arturo’s daughter by his deceased wife, Julia, was also light-skinned, and appeared to be favored by the grandparents over Bird precisely because of her whiteness. What then, as a mother, was Boy supposed to do?

Considering her situation, I expected Boy to come out as a strong, well-fleshed out character, but she didn’t. Neither did Snow, who was given minimal attention. The only (titular) character I liked at all – and I even say this with reservation – was Bird, and there were even times when I didn’t quite understand her. She appeared to have a good head on her shoulders, not easily swayed by other people’s opinions about most anything, but she also exhibited unacceptable behavior, which was strange, coming from someone who was supposed to know better. The dynamics of this three-way relationship would have made for a strong, interesting storyline, but the author’s attempt fell flat.

And so I trudge through the broken, seemingly amateurish writing, expecting a climactic resolution based on skin color and family ties when wham! The story takes a sharp turn into a completely, diametrically opposite direction. It was the most jarring plot twist I have ever read in a long time, and I literally held out my copy of the book, stared at it, and said What the fuck out loud. I never saw that coming, and it was totally, absolutely off. All this time I thought the book was steering me into one direction, only to find out that it would grab me from the back and shove me into another direction. That must be how Boy herself must have felt like when she realized the Whitmans’ deception: hoodwinked, cuckolded.

I’d been so excited to read this, my first Helen Oyeyemi novel. I’d wanted to see how it turns out before I delve into her other novel, Mr. Fox, which several friends like. Now I’m having second thoughts.

Anonymous said…
Do you think that the book itself is still skillful but horribly ill-served by the marketing behind it? I was interested in reading this too.
January 22, 2016 at 10:57 AM