A Brief History of Seven Killings

A Brief History of Seven Killings is framed against an important event in music history: the attempted assassination of iconic reggae legend Bob Marley on December 3, 1976 right inside his mansion at 56 Hope Road, in his native country of Jamaica. A personal account states that seven armed men barged inside Marley’s house while he and his band, The Wailers, were rehearsing for an upcoming peace concert, mortally wounding Marley, his wife Rita, and his manager. Apparently, the attempted killing was connected with Marley’s perceived alliance with the People’s National Party, the ruling political party at the time, and the shooting was allegedly orchestrated by the rival political party, the CIA-backed Jamaican Labour Party. Marley had been trying to stay impartial in the heat of the political situation at the time, but because the forthcoming peace concert had been organized with the help of PNP, that impartiality was practically stripped away. 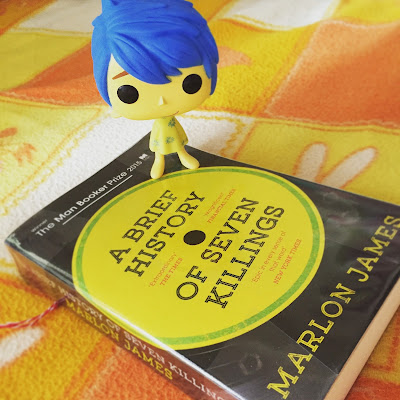 But I won’t go further into the details of the assassination attempt, although that is practically the meat of the novel. Marlon James fictionalized the event, creating characters and back stories and giving names to the gunmen who tried to kill Marley. He set up the political atmosphere prior to the event, creating gangs and ghetto wars and fictional dons that ruled specific territories, framing peripheral stories of characters that, individually, provided glimpses of late 1970s Jamaica. The culmination of these back stories, of course, was the shooting at 56 Hope Road – but the novel doesn’t stop there.

After Marley’s death – referred to in the book as simply “the Singer” – the novel follows the fates of the important characters all the way to New York and Miami, where the drug cartel from Jamaica has been separately established by warring drug lords. Indeed, the drug trade plays an important role in the novel, being a product of the ghettos and gangs in Jamaica. So, more than just fictionalizing the attempt on Marley’s life back in 1976 and the political upheaval in Jamaica at the time, the novel also dealt with the drug cartel from Jamaica to the United States.

The novel was written in the POVs of the central characters. Until now, I still couldn’t decide if going that way was effective and authentic, storytelling-wise, or if it just made everything appear discombobulated. It was also a huge challenge to read Jamaican patois, you know, ghetto speak.  Rasta. How they talk in the Jamdown.

- Survive what? me say.
- How you mean, bredda? Man just done tell everybody say him kill him the I.
- What? What the bombocloth you a talk 'bout?
- Josey Wales' four-eye deputy, Weeper. Him tell people only two day ago he just fly to New York and cancel you.


I had to get used to the reverse use of pronouns ("us" becomes "we", "me" becomes "I" and so on) and tried to read the narrative as they would have been written in proper English. But after a time, it became practically a chore to translate everything. Of course, there were American characters who "spoke" proper English, and reading those was a relief. But since majority of the characters were Jamaican, I had to endure.

In all, I found the premise of the novel very interesting, but it went downhill at a particular point and never recovered. I'm not a big fan of Bob Marley, but I do like him and his music, and reading a fictionalized narration on the attempt on his life was intriguing to say the least. But, like I said, the assassination attempt was the meat of the novel, and when the "Singer" eventually died of disease, the narrative lost its appeal. The assassins outlived him, and although it is fiction, I couldn't care less what could have happened to them.

Angus Miranda said…
Did you try reading aloud? I find that doing this helps when local slang is involved. I also intend to read this this year.
March 10, 2016 at 8:51 PM

Tin said…
I was eyeing this for my next Booker Winner read, after really enjoying The Narrow Road to the Deep North. But I think I'll put it, for now. Haha. But the whole concept of the story though is really interesting. But might try my luck first with the past winners. :)
March 11, 2016 at 8:32 PM

Monique said…
BUDDY: Replacing the 'wrong' pronouns with the correct ones worked naman, most of the time. The other terms like 'bombocloth,' 'rasta,' 'r'asscloth', I had to Google. Hehe.