In My Mother's House

"This is a story of a daughter. A mother and a daughter and everything in between. Much has been said about how hard it is to be a mother. Being a mother is a choice. No one chooses to be a daughter."


I read about Joni Cham and her debut novel, In My Mother’s House, some time ago from a fellow reader and blogger. I read Filipiniana every now and then, so when I got the chance to purchase a copy of this book a couple of years ago, I grabbed it. I admit that it gathered dust before I finally picked it up recently, but it was worth the wait. 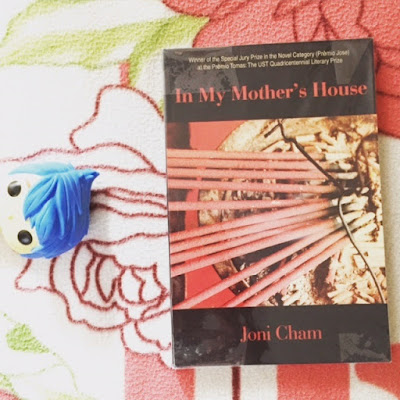 Nina is a twenty-something professional who has lived the past decade of her life away from her Chinese-born mother. Why wouldn’t she? All of her life, she has been treated poorly by her mother, who blames her for the death of her younger brother, Shorty. Nina never felt loved by her mother, so at the first opportunity, she left the house, coming home only once when her father died. She’d been living her life peacefully, away from her mother’s accusing eyes and hurtful words, until she received her mother’s phone call. Her mother was dying and she needed someone to take care of her.

And so Nina returns to her mother’s house. The house where her childhood memories of pains and hurts and deep-seated wounds that time never healed still reside.

The story hit close to home; it was like seeing bits and pieces of my own life in Nina’s. Although I understood where Nina was coming from, I also sympathize with her mother. My family is not Chinese, but my parents had their own set of stringent rules that my brother and I had to follow all the time, lest we earn their ire. I also know of other families who have a similar experience. So Nina’s relationship with her mother wasn’t really unique, but how they separately addressed this relationship, how they resolved their differences, if at all, was what caught my attention. Apparently, indeed, time does not heal all wounds.

The writing style perfectly captured the emotions and nuances that connected Nina and her mother. The author was considerate in translating Chinese phrases into Filipino or English, for the benefit of those who don’t speak the language. The situations that she described were realistic and truthfully depicted that I found myself in her place and hating her mother. And all the heartaches, sadness, and hate that accumulated in Nina’s heart as her mother lay dying, I felt those, as well.

"For how was it possible to argue what to one was misplaced love and to the other a validation of power?"


In My Mother’s House is a Filipino novel that I am proud to read and recommend to friends. I hope that Joni Cham would write more. If so, I would be among the first to read it.