Regeneration is an anti-war novel. I also read that it is a war novel where not one shot is fired – true again. Regeneration takes a page from the life of decorated war hero and English poet Siegfried Sassoon, who served during the First World War. Sassoon wrote A Soldier’s Declaration in 1917, where he essentially condemned the war and stated: "I am making this statement as an act of wilful defiance of military authority, because I believe the war is being deliberately prolonged by those who have the power to end it." As a result, Sassoon is brought to Craiglockhart War Hospital in Edinburgh, an asylum, where he was to receive “treatment” from Dr. William Rivers, a psychiatrist. 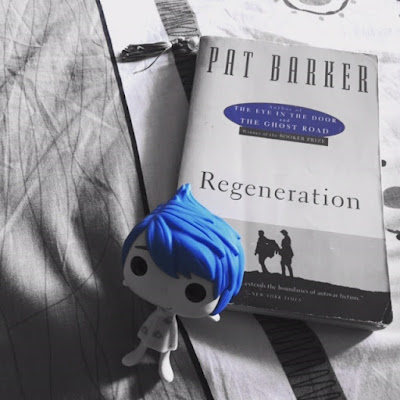 I liked this book for many reasons. One, I agree with Sassoon’s pacifist view that war is not the way to resolve anything; instead, it could even worsen the problem. Two, it dealt with the more serious consequences of war – at least for me it is – and that is the psychological and mental trauma suffered by the soldiers. Three, it showed various facets of the war, from the points of view of those who champion it and those who oppose it. Four, it showed the resiliency and strength of the human spirit. Five, the writing was brisk and the pacing was perfect. And lastly, it combined fact and fiction to make a literary masterpiece: Sassoon and Rivers are only two of the real-life personalities featured in the book, set during World War I.

The variety in the “cases” that were brought to Rivers for treatment made for a very interesting read. These soldiers were mostly treated for shell-shock, but there were more graphic cases. There was Sergeant Burns, who was traumatized after an explosion threw him head-first into the belly of a decomposing German corpse, causing him to inadvertently swallow some of the putrid flesh. There’s Billy Prior, an asthmatic who suffers from selective mutism, who refuses to fully cooperate with Rivers and insists that, despite his asthma attacks, he was well enough to go back to the ongoing war. And there were also doctors, like Dr. Yealland, who mercilessly administered electric shocks on a patient who went mute as a result of the war.

My only gripe about the book – a very minor one, really – is that, for a novel that was supposedly based on Sassoon’s life and views of the war, it featured Rivers much more than it did Sassoon. Rivers was the more prominent character, followed by Billy Prior (another patient at Craiglockhart), and then Sassoon and the rest of the characters. It felt like Sassoon and his Declaration were just a launch pad for the story to take off. After it did, the story took on another angle and explored more characters. But since this is only the first book in the trilogy, perhaps there’s more of Sassoon in the next books?

As a last word, here's a snippet of Sassoon's bio from BBC. Robert Graves and Wilfred Owen were also fictionalized characters in the novel.

In the summer of 1916, Sassoon was sent to England to recover from fever. He went back to the front, but was wounded in April 1917 and returned home. Meetings with several prominent pacifists, including Bertrand Russell, had reinforced his growing disillusionment with the war and in June 1917 he wrote a letter that was published in the Times in which he said that the war was being deliberately and unnecessarily prolonged by the government. As a decorated war hero and published poet, this caused public outrage. It was only his friend and fellow poet, Robert Graves, who prevented him from being court-martialled by convincing the authorities that Sassoon had shell-shock. He was sent to Craiglockhart War Hospital in Edinburgh for treatment. Here he met, and greatly influenced, Wilfred Owen. Both men returned to the front where Owen was killed in 1918. Sassoon was posted to Palestine and then returned to France, where he was again wounded, spending the remainder of the war in England. Many of his war poems were published in 'The Old Huntsman' (1917) and 'Counter-Attack' (1918).


I can’t wait to read the other two books in the trilogy!