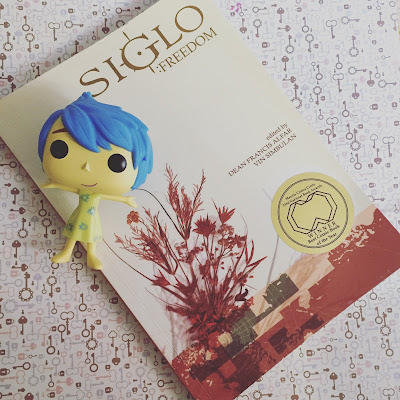 Siglo: Freedom is a collection of 10 graphic stories – “grafiction” the editors called it – set in various places in the Philippines and on various decades in the 1900s. It also tackled different aspects and kinds of “freedom” – freedom to choose one’s life partner, freedom to be one’s own person regardless of gender and civil status, freedom to speak the language of one’s choosing, freedom from the burn and grind of everyday life for the sake of survival. Different artists rendered these stories on panels, with marked differences in style and atmosphere. And because these are all familiar Filipino scenarios, it was easy to digest.

Freedom is an interesting concept, always relevant, and very deep in meaning. Filipinos will always associate the term with centuries of colonization, by the Spaniards, the British, and then the Americans. Our history books are replete with our heroes’ stories of bravery and valor, and we’ll never forget the price our ancestors had to pay to fight for this freedom. But that’s just one aspect of freedom, as this graphic novel demonstrates.

Although the stories were rich and depicted freedom in its many forms, only one of them truly resonated with me: Negros Occidental, 1978. This is the story of two boys from the opposite ends of the social spectrum: one was well-off, the other was poor. They find themselves in the middle of the woods, seated atop an abandoned train with accumulated water inside. The rich boy lets the poor boy try on his brand-new shoes, and in the course of their conversation, voices out his opinion that the poor boy’s father was a thief. The poor boy flashes in anger in defense of the father, and while this is happening, a forest fire breaks out. What happens next is for me to know and for you to find out.

Over-all, I appreciated the message that the graphic novel wants to impart: how precious freedom is, how we long for it, that sometimes we have to pay dearly for freedom, and can anyone be truly free? But somewhere in the middle of my reading I found that, although the stories were relevant, they did not fascinate or completely engage me.

Angus Miranda said…
Haven't read it yet! Will probably start in the weekend. Still not done with Not So Little Life.
March 10, 2016 at 8:46 PM