In The Woods (Dublin Murder Squad #1)

It’s been a while since I last dipped my feet into the suspense/thriller pool, and I’ve always loved a good thriller. I’ve had a secondhand copy of In The Woods in my shelf for a couple of years now, but I never really got around to reading it until the TFG Bingo came along. It seemed like the perfect book to read for the suspense/thriller square, and despite less-than-stellar ratings from some book club friends, I decided to go for it. 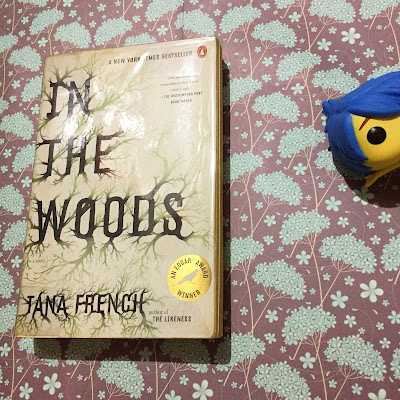 In The Woods is about Detective Rob Ryan, a fairly new addition to the elite Dublin Murder Squad. He and his partner, Detective Cassie Maddox, are tasked to solve the murder of 12-year-old Katy Devlin, whose body was found on a ceremonial stone altar in an archaeological dig. The dig itself forms part of the estate and the woods where Rob, as a child, figured in an unresolved incident: twenty years ago, Rob and his friends, Peter and Jamie, were playing in those woods when something happens – something that Rob’s memory can no longer recall – and Peter and Jamie disappear without a trace. Rob, the sole witness who could have helped the investigators in the task of finding Peter and Jamie, was found hugging a tree, with bloodied feet, shaking, traumatized, with a big chunk of his memory of that day missing. He has since moved on and no one knows that he was the child who survived that incident. As Rob and Cassie delve into the details of the murder of Katy, Rob cannot help but feel that Peter and Jamie’s disappearance was connected, in some way, to Katy’s death.

I totally lost sleep over this book, especially when it came to the last parts. I can’t remember the last time that happened to me! I would turn in around midnight and promise to read one last chapter, and then before I would even know it, it would be 2am. I think I stayed up until 3am to finish reading this, and it didn’t matter how groggy I’d be the next day. I had to know.

Between Rob and Cassie, I liked Cassie more. She was more level-headed, rational, and smart, and although Rob was also the same – otherwise he wouldn’t be a detective now, would he? – Rob was more volatile and had that tendency to be carried away by his feelings. He was also of a one-track mind, and was too stubborn for his own good. Something, I think, that could be attributed to the fact that he was wrecked by the disappearance of his friends 20 years before, and the possibility that this new case assigned to him would be connected to it. Yes, he should be off the case, he would be a totally unbiased and emotionally invested person to crack it, but then we wouldn’t have a story now, would we?

I loved the intricacies of the novel, loved the guessing game and the hunt for the killer. I had my suspicions when I reached the halfway mark, but because I totally suck at whodunits, I couldn’t back my suspicions with solid evidence and explanation. (So much for my future as an investigator, heh. Not that I dreamed of becoming one.) Needless to say, I was satisfied with the ending, and I can understand why many were not, thus compelling them to dislike this book. The novel posed a lot of questions in the beginning, and ran its course through the length of the book. It was, therefore, only reasonable and fair to expect those questions to be answered. Like all those who read this book, I also expected to get complete answers in the end, but when I didn’t, it didn’t infuriate or annoy me. Sure, it would have been better for all the pieces to neatly fall into place, but I didn’t mind when it didn’t. There are just some things you’re not supposed to know, so I’ll just think of it that way.

I look forward to reading the rest of the books in the series soon!