A Tale For The Time Being

There's something Cloud Atlas-esque (Atlas-ish?) about A Tale For The Time Being. It's the metafictional connections between and among characters, principal of which are Nao, a 16-year-old Japanese girl whose family relocated from California to Tokyo after her father lost his job at Silicon Valley, and Ruth, a middle-aged novelist who lives with her husband, Oliver, in a small island off the coast of Canada. One fine day, while Ruth treks along the beach near her home, she picks up a barnacle-encrusted plastic bag containing a diary, a packet of letters, and an old sky soldier watch. They all belonged to Nao, whose story Ruth reads from the diary. 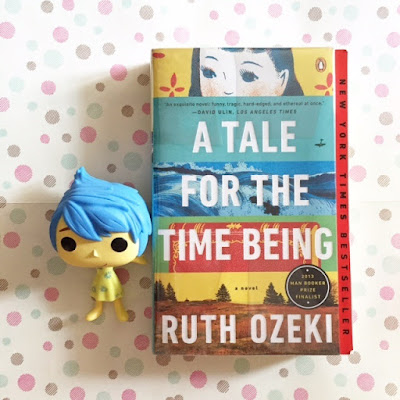 Ruth presumes that the plastic package, coming as it did from Japan, drifted off onto their beach after the earthquake and tsunami that hit Japan in 2011. As she reads through the diary, she discovers that Nao's father attempted suicide several times as a result of losing his job in the States, that Nao's mother had to take on the role of breadwinner, and that Nao was bullied so much in school up to the point that she herself began to contemplate suicide. Ruth also reads about old Jiko, Nao's Buddhist grandmother who was also a nun in a temple at the Fukushima prefecture, and who taught Nao all about what a moment is, and what a time being is. Nao also writes in her diary about her grand-uncle, Haruki #1 (because her dad is also named Haruki), a kamikaze pilot during the second World War, whose story of honor and duty inspired her.

As she reads the contents of the package, Ruth gets emotionally attached to Nao, getting completely affected by the seeming cries of help that were her diary entries. She wants to help, but there is total dearth of information: when did Nao write the diary? Could she still be alive, or had she committed suicide? Where could she be? In the end, was it better for Ruth to not know about Nao's whereabouts, and just hope for the best?

A Tale For The Time Being was, for me, a highly philosophical read. I won't claim to understand every concept weaved into the plot but I appreciated the nuances of memory, of time, of the now (you know, Nao?), of time beings, and of how, sometimes, it is best to not know, to not be aware. Are you familiar with Schrodinger's cat? That experiment on quantum physics and subatomic particles and other scientific geekery that my little brain can't fathom? The integration of this thought experiment into the novel jarred me at first, but you know what, I think I got it, in the end. Well, perhaps not the whole scientific experiment with all its gory details, but the concept of it as relevant to the story of Nao and Ruth. Ruth wanted to know what became of Nao, but perhaps it was better that she didn't. That way, Nao will always remain in Ruth's memory as the girl she projected herself to be in her final diary entries. Ruth will always speculate, and wonder, and like Schrodinger's cat, Nao will always be both alive and dead, in a different and parallel universe.

There was also mention of the I-novel, a "literary genre in Japanese literature used to describe a type of confessional literature where the events in the story correspond to events in the author's life." Nao mentioned old Jiko's intended I-novel, and she gets the idea to write the latter's stories, as told to her, before old Jiko passes on. There is a metafictional aspect in this part of the novel because Nao's diary is, for all intents and purposes, her own sort-of I-novel, and Ruth, at the time that she gets hold of Nao's plastic package, was (stumped) in the middle of writing her memoir. Likewise, the packet of letters that came with Nao's diary were written by Haruki #1 to his mother, old Jiko, relating his experiences as he and his fellow recruits trained with the Imperial army in preparation for the war. Again, an I-novel, of sorts. Finally, it makes me wonder if this novel, itself, is an I-novel of the author. Just a thought.

Nao is the central character, and my heart went out to her. She was so young, and she deserved better. But what can she do? She could not have chosen her parents; her dad went into a terrible state of depression after losing his job in the US and attempted suicide several times. Her mother can only take the cudgels for the family and do so much. Nao's status as a transfer student from California made her the butt of jokes in school, and her classmates did horrible, horrible things to her that one can only imagine. Nao is fortunate to have old Jiko to look up to, but later on her lack of faith and direction eventually catches up with her. One can only hope that her father will get his act together, for the sake of his family.

Ruth, on the other hand, is a mere spectator. She watches Nao's story unfold between the pages of her diary as she tries to make sense of her own life: with her husband Oliver, with the unfinished manuscript that was to be her memoir. Nao's life consumes her, and she wouldn't stop until she comes to the end of Nao's story.

The concept I liked best was the concept of a time being, or a being that exists in time, in the now. Nao. It reinforces the idea that we all live in the present, that we ought to make the best of our lives, one day at a time, and perhaps, someday, we can get to write our I-novel from those experiences. The idea of suicide as an exit, while seemingly acceptable for certain cultures like the Japanese (kamikaze pilots, harakiri... hell, they have popular ways of committing suicide and support groups where people can commit group suicide!), remains a negative course of action for me.

So why am I not giving this book the full five-star rating? There's a part near the end, as Ruth was reading the last pages of Nao's diary, that I still could not comprehend. Perhaps someone could explain that bit to me?

All in all, however, A Tale For The Time Being is a wonderful read. But don't take my word for it.

"Everything in the universe is constantly changing, and nothing stays the same, and we must understand how quickly time flows by if we are to wake up and truly live our lives."